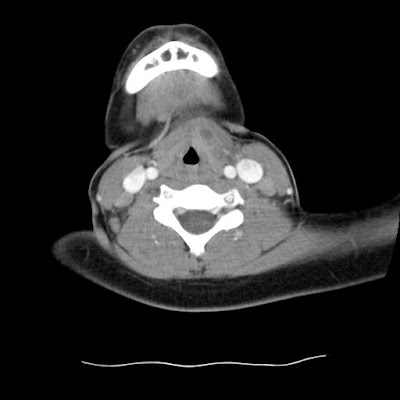 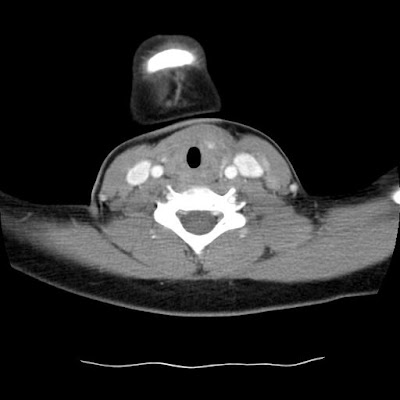 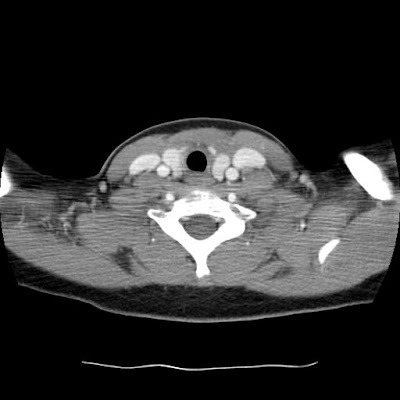 The differential diagnosis includes obstructed laryngoceles and branchial cleft cysts. Laryngoceles are dilated laryngeal saccules. They may appear as a well-defined smooth mass in the lateral aspect of the superior paralaryngeal space. They may occur deep to the strap muscles, however, they arise within the larynx and can be visualized to connect back to the larynx. Failure of complete obliteration of an embryonic branchial cleft in the eighth to ninth week of fetal development results in a branchial cleft cyst, 95% of which derive from the second branchial cleft. Branchial cleft cysts usually manifest in the young adult as a mass near the mandibular angle (submandibular space), however, they can occur anywhere along the residual cleft tract extending from the suprclavicular region to the tonsillar fossa. Typically, the cyst is a round or oval mass that displaces the sternocleidomastoid muscle posteriorly or posterolaterally, the carotid artery and internal jugular vein medially or posteromedially, and the submandibular gland anteriorly.
Pubblicato da David Spizzichino a 16:00