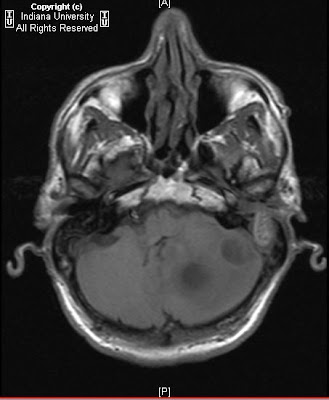 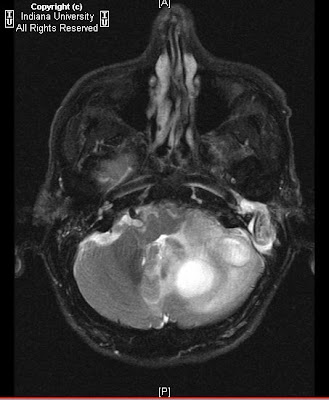 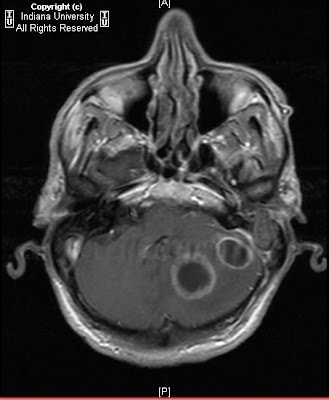 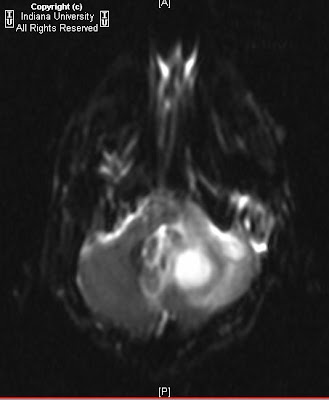 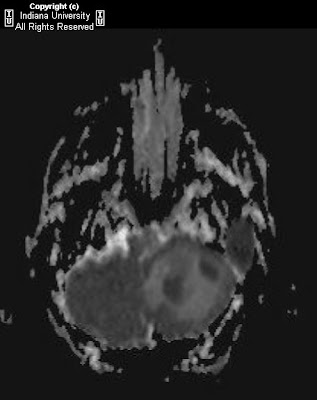 Additional clinical history: Patient also had ear pain and some drainage from his left ear.

There are 2 ring-enhancing lesions within the left cerebellum measuring. There is increased signal of the lesions on the DWI images (low values on ADC maps). There is surrounding edema with mass-effect on the pons and brainstem as well as narrowing of the fourth ventricle. There is also thick enhancement of the meninges adjacent to the mastoid bone. There is expansion and enhancement of the mastoid air cells on the left. Other images showed narrowing of the left sigmoid sinus without thrombosis. There is no hydrocephalus.

Most brain abscesses are caused by pyogenic bacteria
Most commonly, infectious agents gain access to the CNS by spread from a contiguous focus of infection, such as otitis media, mastoiditis, infection of the paranasal sinuses, or dental infection.
Ring enhancement represents most active area of infection
Diffusion-weighted MR may be useful in differentiating abscess from necrotic tumor. Abscess typically shows as bright areas on DWI with corresponding dark regions of "restricted diffusion" on ADC maps. That is, ADC values should be low in areas that are bright on DWI if the cause is restricted diffusion rather than the phenomenon of T2 shine-through. Necrotic tumors usually have higher ADC values (and corresponding dark areas on DWI).
Pubblicato da David Spizzichino a 16:00