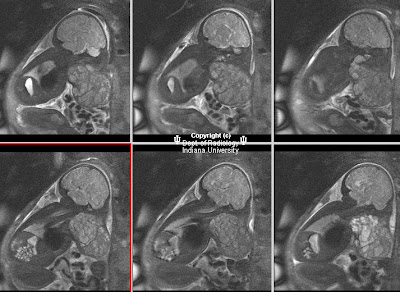 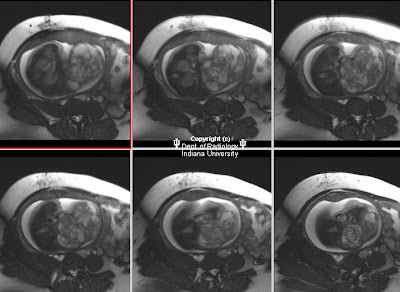 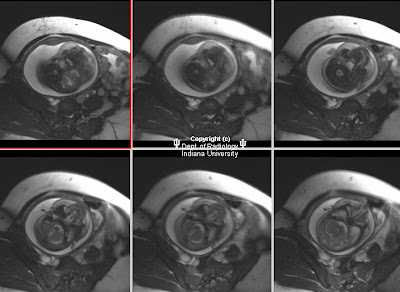 Fetal MRI reveals a large mass extending from the anterior palate to the right supraclavicular region. It involves the anterior right neck of the fetus, as well as the right masticator space, parapharyngeal space, carotid, and parotid spaces. The airway is not well visualized, presumably due to airway compression.

Incidence is 1:5000.
Caused by absent or abnormal connections between the lymphatic and venous systems, or from sequestration of embryonic lymphatic tissue.
50% association with chromosomal abnormalities.
Often missed in the first trimester, as the most common initial finding of increased nuchal lucency is difficult to detect.
In the second trimester, is most commonly identified on ultrasound as a cystic mass with multiple thin walled septations, frequently with a posterior midline band, representing the nuchal ligament.
Important to identify anterior cervical soft tissue involvement because of increased morbidity from respiratory compromise.
Important to differentiate from posterior encephalocele, which is associated with an underlying skull defect, and cervical myelomeningocele, which is associated with an underlying vertebral defect.
MRI is usually not necessary in diagnosis, although it is helpful for surgical planning. In this case, Cesarean section with head delivery was performed at 40 weeks gestation to maintain uteroplacental circulation while tracheostomy was created because of anterior neck involvement and airway compression. Bulk resection was performed 3 weeks later.
Pubblicato da David Spizzichino a 16:00