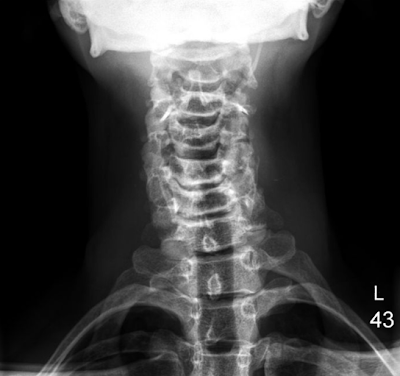 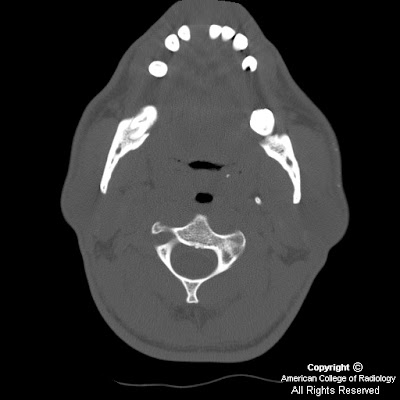 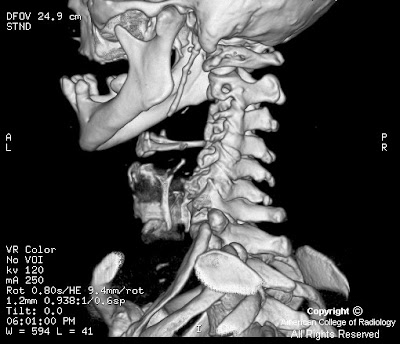 Figure 1 : AP radiograph of the cervical spine demonstrates an asymmetric ossified structure extending from the left side of the skull base.
Figure 2 and Figure 3 : Axial CT image and a 3D reconstruction demonstrate an elongated left styloid process that extends to the level of the vallecula as can be seen in Eagle syndrome.


An elongated styloid process, as well as calcification of the stylohyoid ligament, can result in clinical symptoms, known as Eagle syndrome. In an adult, the normal length of the styloid process is 2.5 cm. It is considered elongated when 3 cm or greater. The etiology of this rare disorder is unknown. It tends to occur at an older age, and is more common in women. Although approximately 4% of the population is thought to have an elongated styloid process, only 4 – 10.3% of this group experience symptoms. Hence, an elongated styloid process may go unnoticed, unless it results in clinical symptoms. These symptoms may occur due to irritation of adjacent nerves, most commonly the glossopharyngeal, lower branch of the trigeminal, and chorda tympani nerves. Patients may experience throat or ear pain, taste disturbance or throat discomfort. Alternatively, symptoms may arise from local mass effect, such as dysphagia or a foreign body sensation.

The differential diagnosis for Eagle syndrome is vast, largely due to the varying types of symptoms that patients may experience. However, other entities to consider include migraines, neoplasms, temporal arteritis, laryngopharyngeal dysesthesia, Sluder syndrome, cluster type headaches, glossopharyngeal/trigeminal neuralgia, temporomandibular arthritis, hyoid bursitis and cervical vertebral arthritis. Imaging will distinguish between these entities and Eagle syndrome.

Diagnosis of Eagle syndrome involves both clinical and radiological means. On physical examination, a mass may be palpated in the tonsillar fossa. A lateral plain film of the cervical spine will reveal an asymmetric elongated and ossified styloid process. A CT scan is often obtained to help clarify the relationship between the styloid process and adjacent structures of the neck. Imaging may also reveal a calcified stylohyoid ligament. A barium study performed for dysphagia may show a filling defect due to the indentation caused by the elongated styloid process.

Treatment of Eagle syndrome is both medical and surgical. In patients with mild or moderate symptoms, treatments with NSAIDs or steroid injections may be adequate. Surgical intervention is used in patients with severe symptoms and involves surgical removal of the elongated portion of the styloid process. One of the most common complications with surgical removal is infection of the deep spaces of the neck, reduced via an extraoral approach.
Pubblicato da David Spizzichino a 16:00