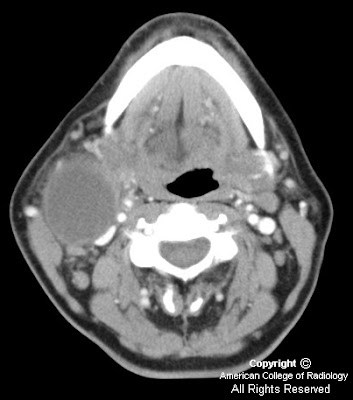 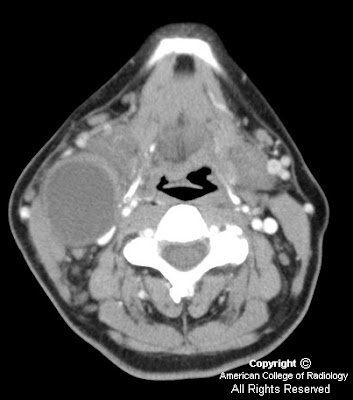 Contrast-enhanced CT examination of the neck demonstrates an ovoid, well-circumscribed low attenuation lesion in the right neck.
The images show a branchial cleft cyst, which is well-circumscribed with a thin enhancing rim. The branchial cleft cyst is anteromedial to the sternocleidomastoid muscle (Figure 1 and Figure 2) and lateral to right internal and external carotid arteries (Figure 1 and Figure 2).


During normal embryologic development, the branchial arches arise at four weeks. The second branchial arch overgrows the third and fourth arches during development.
The branchial arches involute by week seven. If an arch fails to involute completely, it may form an epithelial-lined cyst. These congenital cysts may be identified in the early years with a second peak incidence in the second and third decades. BCCs are typically a painless compressible mass. They may occasionally become infected and present with fever, induration, and tenderness.

The second BCC is the most common, accounting for 90% of BCCs. A second BCC is typically found at or slightly below the angle of the mandible. The second BCC is centered lateral to the carotid sheath and anteromedial to the sternocleidomastoid muscle. Medial beaking of the cyst can be seen if it extends between the external and internal carotid arteries. The less common first BCC is seen in a periauricular or periparotid location. It can communicate with the external auditory canal and can be associated with otorrhea and parotid gland cysts. A third BCC is seen in the posterior cervical space.
Pubblicato da David Spizzichino a 16:00