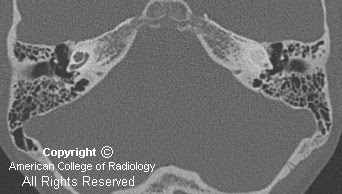 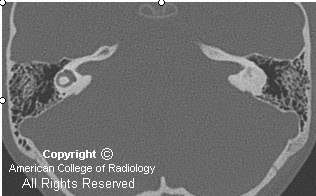 There is osseous obliteration of the visualized cochlea (Figure 1), vestibule, and lateral semi-circular canal (Figure 2).

Ossification in labyrinthitis ossificans commonly occurs primarily at the basal turn of the cochlea, which is the insertion site of the electrodes of cochlear implant devices, and subsequently may interfere with full insertion and successful results. MRI is used to assess for early fibrosis prior to the formation of calcification.
Pubblicato da David Spizzichino a 16:00