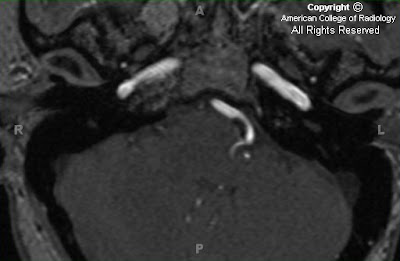 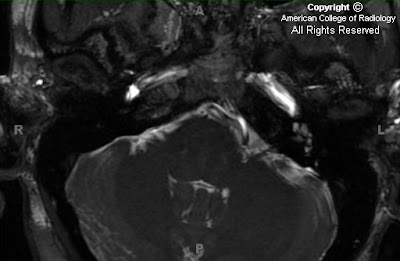 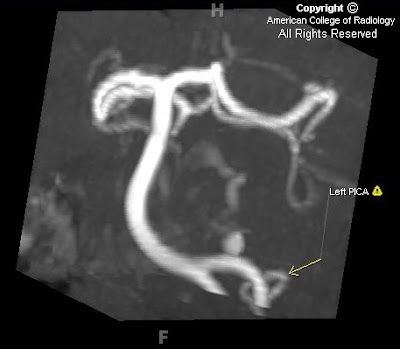 The “kindling theory” of the etiology of vascular loop syndrome hypothesizes that vessel contact results in ectopic excitation with antidromic impulses traveling back to the brainstem nuclei. Reorganization within the nucleus results in increased discharge with hyperactivity traveling orthodromically down the CN nerves causing the aforementioned symptoms. Microscopic evaluation demonstrates breach of the myelin cover of the affected CN. Other etiologies of vascular loop syndromes that are less likely include atherosclerotic vertebrobasilar dolichoectasia or fusiform aneurysms impinging on the CNs.

High resolution T2 MR shows serpiginous asymmetric signal void representing the vessel in the CPA. The offending vessels may be extremely small and may not be resolved by imaging. MR angiogram may be of benefit in delineating the vertebrobasilar tree. FLAIR MR is useful to assess for MS plaques in the brainstem nuclei. DWI can be performed to assess for epidermoids in the CPA causing compression of the CNs. T1 contrast enhanced sequence can be used to assess for an asymmetric venous cause as well as neuritis, perineural tumor or cisternal tumor.

Patients with CN V involvement present with episodic lancinating pain along the V2 or V3 distributions. The pain can occur spontaneously or in response to gentle tactile stimulation of a trigger point. CN VII involvement causes unilaterial involuntary facial spasms, which usually begins with orbicularis oculi spasms. Demographically, patients are generally greater than 65 years of age with no gender predominance. Some patients can be managed conservatively on medications with microvascular decompression (MVD) performed when the symptoms are disabling in spite of drug therapy. Prognosis for TN after MVD is fairly good with 70% pain-free on no medications 10 years after surgery. Recurrences usually happen within the first two years postoperative. One percent have permanent post-MVD complications with unilateral deafness being most common.

Prognosis for HFS after MVD is good with 90% achieving greater than five year symptom relief. Ten percent, however, have permanent post-MVD complications with unilateral deafness being most common.
Pubblicato da David Spizzichino a 16:00