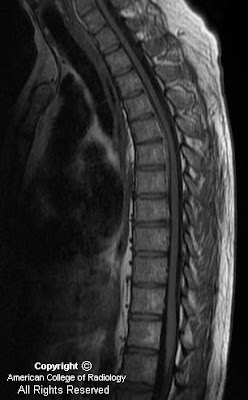 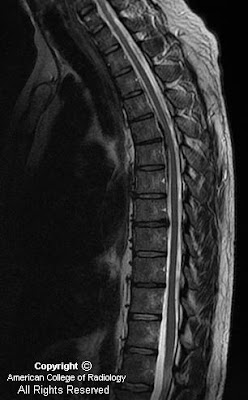 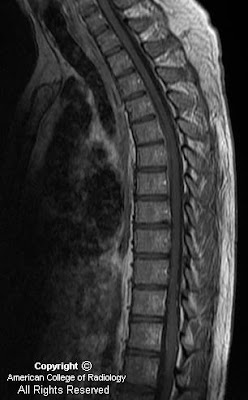 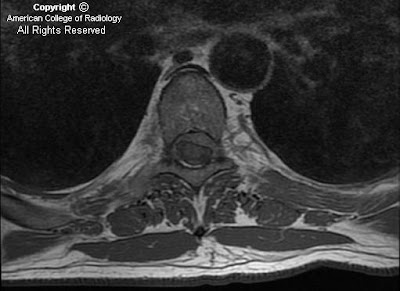 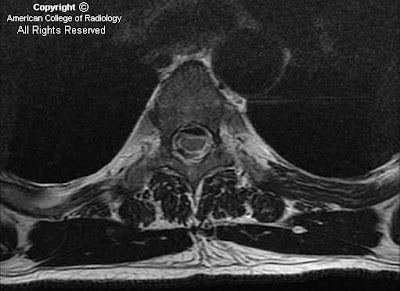 A sagittal T2 weighted MR of the thoracic spine demonstrates a fluid collection in the ventral epidural space from T2-T3 to T7-T8. This collection is iso-to hyperintense on T1 weighted sequences, and hypointense on T2 weighted sequences, consistent with recent hemorrhage.
A post contrast axial image through the upper chest demonstrates high attenuation within the ventral epidural space at the T6 level which is not visualized on the corresponding pre contrast images, consistent with active extravasation of contrast.


Spontaneous epidural hematomas of the spine are uncommon, with a reported incidence of 0.1 per 100,000 per year. In regards to location in adults, they occur most frequently in the thoracic followed by lumbar, followed by cervical spine and are usually dorsally located. The source of bleeding is most often venous and may occur with only minimal trauma or with transient venous hypertension from Valsalva maneuvers such as sneezing or coughing. Coagulopathy, vascular anomalies, disc herniations, pregnancy, and Paget's disease are all possible underlying etiologies. However as in this case, 40-50% of cases are idiopathic.

Patients typically present with acute onset of neck, back, or radicular pain, often mimicking acute disc herniation. Obviously the size of the epidural hematoma dictates the severity of neurologic symptoms and urgency of intervention. Men are affected 4 times more frequently than women, and the entity demonstrates a bimodal distribution most commonly occurring in children and patients in their 50's and 60's.

Noncontrast CT may demonstrate a hyperdense epidural mass however when an epidural hematoma is suspected, MR is the imaging modality of choice. Signal charcateristics will vary depending on the age of the hemorrhage. Fat suppressed images may be helpful to differentiate from fat. On MR or CT post-contrast images, focal or central enhancement in the region may demonstrate active extravasation of contrast, as in this case. Peripheral enhancement has been described frequently, and may be secondary to the localized inflammation of the dura. Other important etiologies to consider in the differential diagnosis include disc extrusion/migration, epidural mets, lymphoma, epidural abscess, epidural lipomatosis, or subdural hematoma. Obviously history and onset of symptoms may help to differentiate. As mentioned, disc extrusion/migration may be associated with a spontaneous spinal epidural hematoma.

Treatment of this entity is highly variable, depending on the severity of symptoms. Overall mortality is around 5%. Extreme cases may require immediate evacuation and decompression laminectomy. If the patient has a coagulopathy, correction is usually required. Steroids may be helpful to decrease inflammation and cord edema. Many times however, conservative management is appropriate and the hemorrhage often resolves spontaneously, as demonstrated in this case.
Pubblicato da David Spizzichino a 16:00