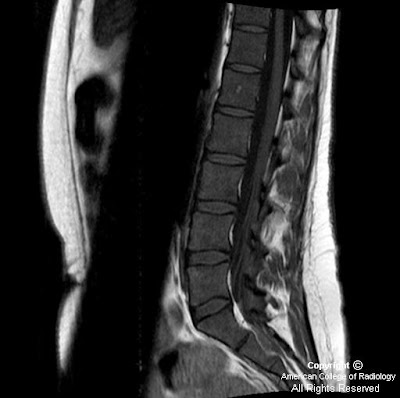 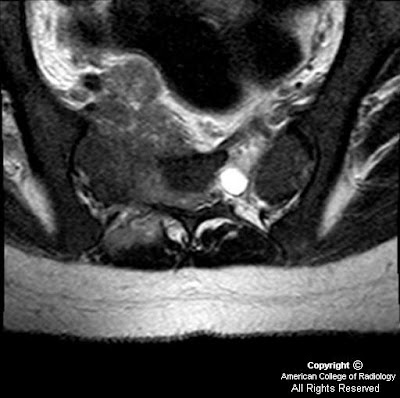 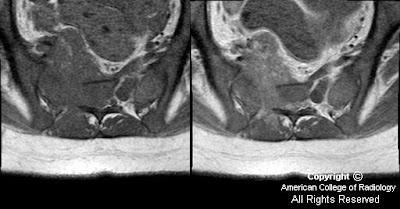 Sagittal T1 image of the lumbosacral spine demonstrates decreased marrow signal throughout the lumbosacral vertebral bodies consistent with marrow infiltration secondary to the patient's leukemia.
Axial T2 image through the level of the sacrum demonstrates an isointense lesion originating in the right sacral ala which is invading the S1 and S2 exiting nerve roots. Incidental note is made of a left sacral foraminal Tarlov cyst.
Axial T1 pre and post contrast images demonstrate enhancement of this sacral mass.

Granulocytic sarcomas are extramedullary masses composed of granulocytic cell precursors, occurring in patients with leukemia or other myeloproliferative disorders. First described by Burns in 1811, they were given the name "chloroma" by King in 1853, due to the green color produced by the high levels of myeloperoxidase in these cells. Recently there has been a shift away from using the term "chloroma", as these cells can have varying amounts of myeloperoxidase and can produce other colors as well. Granulocytic sarcomas most commonly occur in patients with AML, however are still rather rare, occurring in only 2.5-9.1 % of patients with AML. Children are more commonly affected than adults with 60% occuring in patients younger than the age of 15. While granulocytic sarcomas most commonly develop after the diagnosis of AML has been made, they can precede the hematologic leukemia, making their diagnosis more difficult. In these instances, biopsy is necessary to make the diagnosis.

There is dispute as to whether patients with granulocytic sarcomas have worse prognoses. Treatment of granulocytic sarcoma is usually with systemic chemotherapy. If the mass is resistant to chemotherapy, localized radiation or surgery may be considered. While treatment is usually successful, recurrence does occur in up to 23% of patients.
Pubblicato da David Spizzichino a 16:00