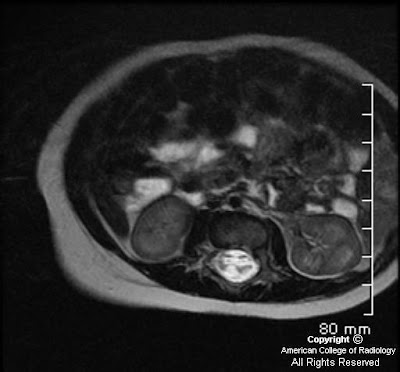 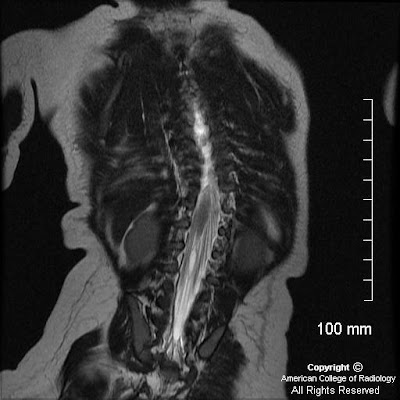 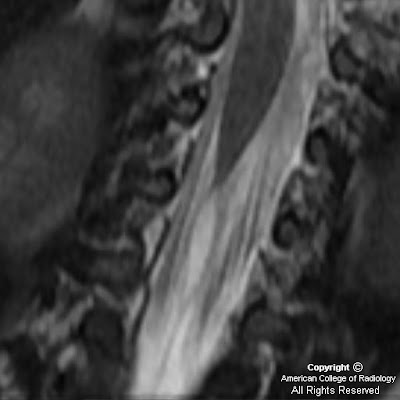 Cystic structures within the distal spinal cord, conus medullaris, and filum terminale are commonly seen on routine lumbosacral spine sonography in the neonates. These patients often present with abnormal laboratory values and/or external body features that are suggestive of underlying spinal dysraphism or neural tube defects. The diagnostic consideration of a cystic lesion in this region includes: syrinx, neoplasm (ependymoma or astrocytoma), persistent ventriculus terminalis in the conus medullaris, and filar cyst in the filum terminale of the cord.

Filar cysts are a relatively common entity in the neonates usually detected on screening lumbosacral sonograms. However, it has not been extensively reported in the literature. It is considered a normal variant when found as an isolated finding. The exact etiology of a filar cyst has not been reported. Literature has suggested that filar cysts are developmentally similar to the septum pellucidum and ventriculus terminalis, which can regress with age. On ultrasound, it is usually describes as an anechoic, cystic structure completely contained within the filum terminale. MRI of the lumbosacral spine can be obtained in cases that are questionable on ultrasound. Filar cyst follows the typical characteristic of a simple cyst in all sequences of an MR study. Ventriculus terminalis is a normal developmental variant described as a nonenhancing dilation of the ependyma-lined central canal at the level of the conus medullaris. Persistent ventriculus terminalis deserves special attention such that it is often used interchangeably with filar cyst in the literature, in the setting of cystic lesions seen in the distal lumbar spinal cord proximal to the conus medullaris. A cystic lesion in the absence of a solid component makes a neoplastic process less likely. A syrinx isolated to the distal spinal cord is also less common as it usually has a superior extension.

Treatment options are primarily based on patient's symptomatology. In asymptomatic neonates/infants, no further imaging is needed.
Pubblicato da David Spizzichino a 16:00