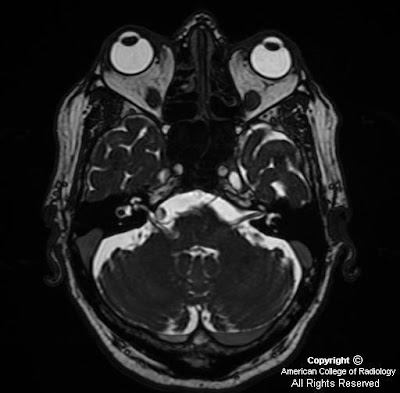 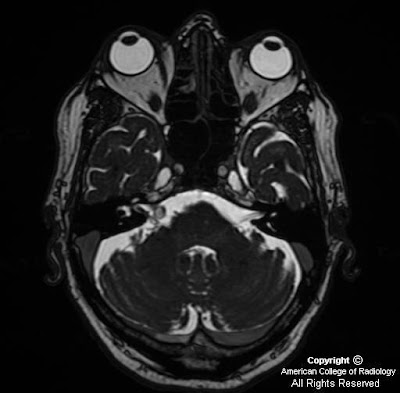 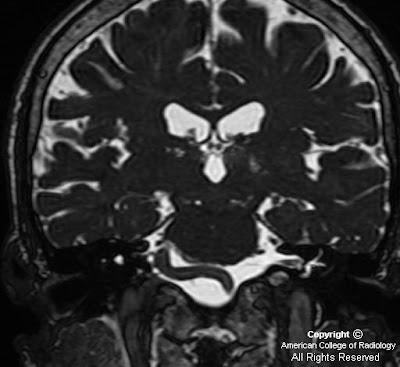 
Hearing loss can be characterized as either conductive or sensorineural based on clinical exam and audiometry. Conductive hearing loss involves an abnormality of the external auditory canal to the oval window and is best evaluated with high resolution CT as it is able to display the external auditory canal and middle ear structures, particularly the ossicles. Sensorineural deafness implies an abnormality of the inner ear, vestibulocochlear nerve, or its central components which are best evaluated with MRI.

Neurovascular compression syndrome (NVCS) refers to a group of disorders in which an aberrant or tortuous vessel causes nerve compression with subsequent hyperexcitation and neuropathy. Vascular compression syndrome has been described as a causative etiology for cranial nerves III, V, VII, VIII, and IX. Controversy exists, however, because of the normal intimate apposition of nerves and vasculature around the brainstem and the frequency with which it is seen in asymptomatic patients.

Vestibulocochlear NVCS is symptomatic vascular compression of cranial nerve VIII. Clinical symptoms are often non-specific including tinnitus, vertigo, and sensineural hearing loss. A recent article in the American Journal of Neuroradiology failed to reliably determine neurovascular compression as a cause of tinnitus although some authors maintain it may still be considered when presenting with so called "typewriter" tinnitus. In decreasing order of frequency, vessels indicated in NVCS include the anterior inferior cerebellar artery, posterior inferior cerebellar artery, and vertebral artery.

The following MRI classification system for neurovascular compression has been proposed to aid in surgical planning.
- Type I: Point compression where a limited segment of the nerve is in contact with the vessel.
- Type II: Longitudinal compression in which the nerve and vessel traverse parallel to each other.
- Type III: A vascular loop encircling the neve.
- Type IV: The nerve contour is deformed and/or thinned.

Definitive treatment involves retromastoid craniectomy and microvascular decompression in which a small synthetic sponge is interposed between the offending vascular structure and nerve.
Pubblicato da David Spizzichino a 16:00