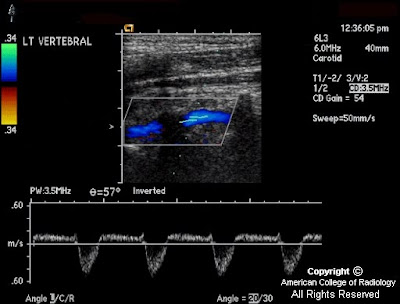 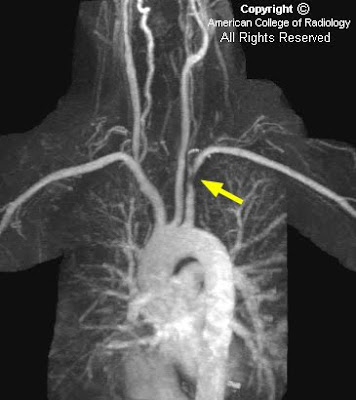 
First described in 1961 by Reivich, et al, the triad of posterior fossa cerebral ischemia, unequal radial pulses, and stenosis/occlusion of the proximal subclavian artery was later dubbed the “subclavian steal syndrome” (SSS). Neurologic symptomatology indicates concomitant hemodynamically significant disease in the cerebral arterial circulation (such as inadequate Circle of Willis) or supply to this circulation (such as carotid stenoses). Only 5% of patients with evidence of angiographic steal, designated “subclavian steal phenomenon” (SSP), have associated neurologic symptoms.

Atherosclerotic disease is the primary underlying etiology of subclavian artery stenosis and SSS, accounting for the increased incidence of SSS in the elderly and in males vs females (1.5-2.1:1). Patients with SSS present with symptoms of vertebrobasilar insufficiency (dizziness, ataxia, and visual changes) and may also have arm claudication that is exacerbated with exercise or neck movements. Upon examination, there is diminished or absent radial/ulnar pulses, blood pressure reduction of greater than 20 mm Hg in the diseased arm or a proximal subclavian artery bruit.

Diagnostic and therapeutic angiography may be performed via a femoral, brachial or combined femoral/brachial approach. Subclavian stenoses may be treated with percutaneous transluminal angioplasty (PTA) or primary stenting. If PTA is utilized as the primary therapy, results should be confirmed with post-PTA hemodynamic evaluation. A suboptimal result can be improved with stent placement if intraarterial systolic pressure gradient across the lesion after PTA is =5 mm Hg or if there is =20% residual stenosis. Many operators choose to primarily stent subclavian artery stenoses. Three to 5 year patency rates of both PTA alone or combined PTA/stenting range from 86%-89%. Restenoses result from intimal hyperplasia. Most symptomatic restenoses occur within 26 months of intervention, and thus regular follow-up for at least 2 years post-PTA is recommended. Treatment of subclavian artery occlusion is also possible, although technical success is lower. Mortality is rare and minor complications are usually due to access site hematomas.

Surgical treatment options are less favored because of invasiveness and documented mortality rates of 0.4%-2.4%. These treatments include carotid-subclavian bypass with synthetic or vein graft, carotid-subclavian transposition or axilloaxillary bypass.
Pubblicato da David Spizzichino a 16:00