Fibrous dysplasia (FD) of the skull 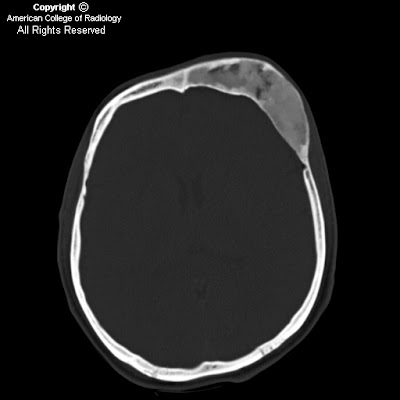 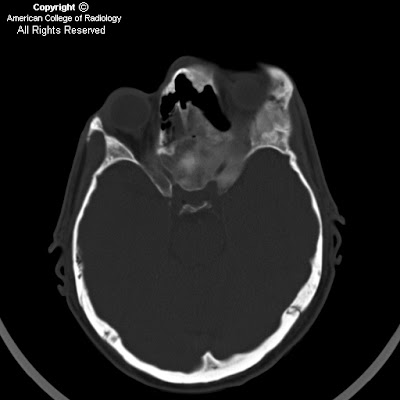 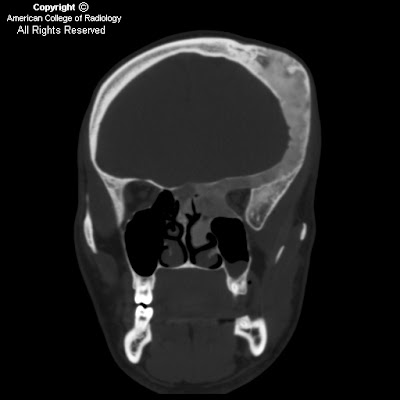 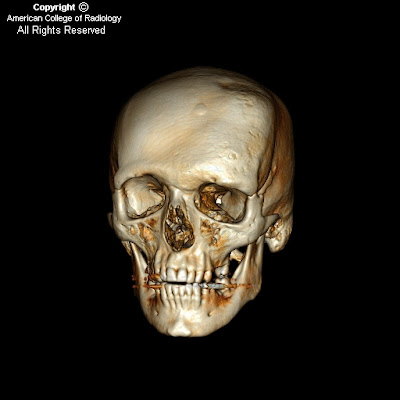 There is expansile lesion involving predominantly the left frontal and sphenoid bones (Figure 1 and Figure 2). The diploic space is widened with displacement of the outer table. This gives a “ground-glass” appearance with small lytic areas (Figure 1) dispersed within. This expansile, predominantly sclerotic lesion is seen to involve the sphenoid and ethmoid bones also (Figure 2 and Figure 3). The nasal cavity is distorted.
The bilateral anterior clinoid processes are involved by this expansile lesion (Figure 2), with mild narrowing of the bilateral optic canals (Figure 2).
No significant soft tissue mass is seen to be associated with the expansile bony lesion.
Figure 4: 3D rendering nicely demonstrates the abnormally deformed calvarium in this patient.


FD is an acquired and benign disorder in which the normal medullary space of an affected bone is replaced by fibrous tissue. The disorder usually manifests in childhood and adolescent years, and presents as either an incidental finding in asymptomatic patients or with nonspecific symptoms, such as pain, swelling, or tenderness. Skull involvement can lead to hearing impairment. There are monostotic (involving a single bone) and polyostotic (involving multiple bones) forms. The monostotic form is much more prevalent than the polyostotic form. FD can affect any bone; however. when solitary, the most common bone to be affected is the proximal femur, followed by the ribs and craniofacial bones. The polyostotic form can vary, and usually affects the femur, tibia, pelvis, and bones of the feet. The association of polyostotic fibrous dysplasia with precocious puberty in girls, and cafe-au-lait spots is termed the McCune-Albright syndrome. The combination of intramuscular myxomas and polyostotic fibrous dysplasia is called Mazabraud syndrome.

Because FD is a medullary process, the radiographic appearance consists of a lucency with an epicenter that is intramedullary or eccentric, but not cortical. The lesion can appear cystic and expansile with endosteal scalloping, but is always well defined without breaking through the bony cortex. The lucent lesion is usually described as having a ground-glass quality. Another classic appearance includes the shepherd’s crook deformity, which describes the appearance of the femoral neck that results when the disorder causes varus angulation. FD of the calvarium appears as increased density, usually at the skull base. Paget’s disease can give this appearance as well; Paget’s is generally bilateral, whereas FD is unilateral.

There is rare potential for malignant transformation, especially in the polyostotic form. When radiologic features such as cortical destruction, periosteal reaction, or a soft tissue mass are present at the site of prior FD, malignant degeneration should be suspected. Progression to osteosarcomas, fibrosarcomas, and malignant fibrous histiocytomas has been reported.

Most lesions appear low to intermediate signal on T1-weighted MR images. The signal varies on T2-weighted images, but is generally high in signal, especially with the presence of nonmineralized and cystic components. Enhancement is present, and is usually heterogeneous. Because the MR imaging appearance is variable and can imitate neoplasm, correlation with plain films or CT is helpful when fibrous dysplasia is suspected. MRI is useful for evaluating cranial neuropathy and suspected malignant transformation.

Involvement of the skull may cause cranial nerve dysfunction with visual and hearing impairment. Mucoceles may complicate paranasal sinus ostial bone involvement. The term "leontiasis ossea" describes a rare form of polyostotic disease that involves the frontal and facial bones. Another craniofacial entity, “cherubism,” is a hereditary fibrous lesion of bone, symmetrically involving the mandible and often the maxilla.
Pubblicato da David Spizzichino a 16:00