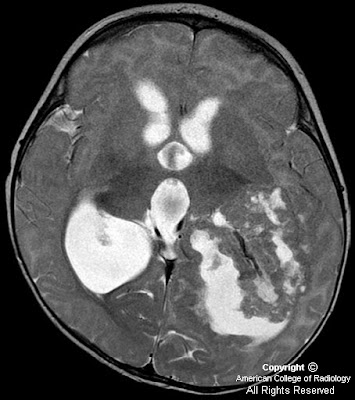 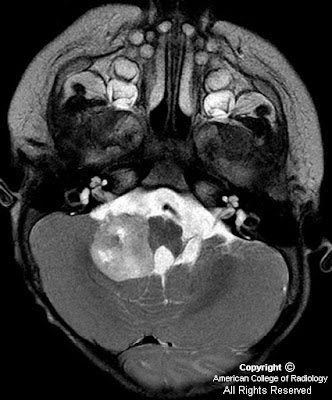 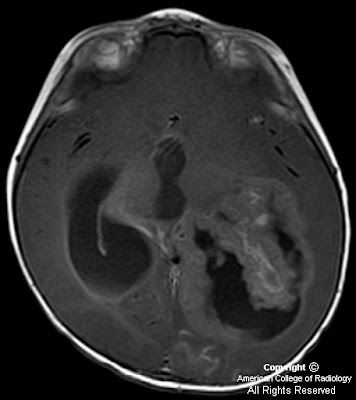 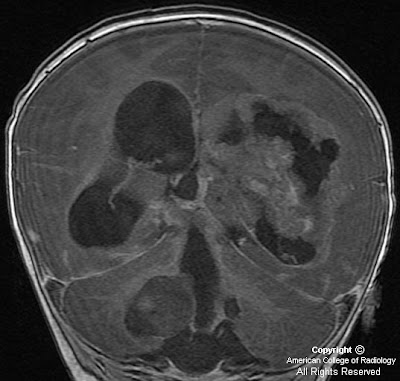 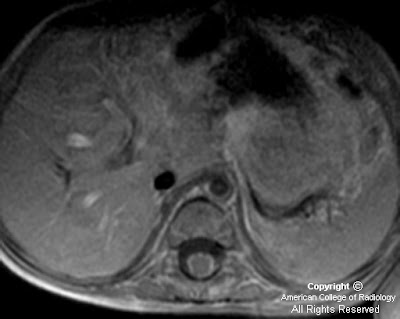 Choroid plexus tumors usually present in the first decade of life. Most choroid plexus tumors (about 80%) occur as the benign, slowly growing papilloma, a WHO grade I tumor with a favorable overall prognosis. The malignant variant manifests as a much more biologically aggressive WHO grade III tumor, and is far more common in children than adults.

Clinical presentation is usually due to increased intracranial pressure and hydrocephalus, due mainly to CSF overproduction, but mechanical obstruction and impaired CSF resorption may also contribute.

Choroid plexus papillomas usually present as lobulated intraventricular masses with intense, homogeneous enhancement in a child. These tumors are soft, well-circumscribed cauliflower-like masses with prominent lobulations peripherally. The mass can be hyperattenuating on CT with calcification seen in 25%. Necrosis resulting in heterogeneity and parenchymal invasion are characteristic features for choroid plexus carcinoma. Extension from one ventricle to another or into the cerebellopontine angle is a characteristic feature. The presence of focal neurological signs also suggests choroid plexus carcinoma due to parenchymal invasion. CSF seeding can be seen with both papilloma and carcinomas and enhanced MRI of the entire neuraxis is recommended prior to surgery to evaluate extent of disease.
Pubblicato da David Spizzichino a 16:00