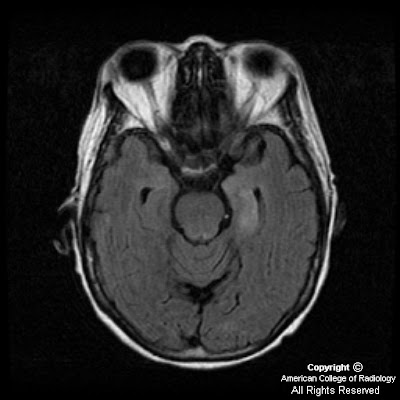 Paraneoplastic limbic encephalitis (PLE) is a remote neurologic effect of cancer outside of the CNS. It is the most common of the clinical paraneoplastic syndromes. The typical presenting symptoms include short-term memory loss, seizure, or psychologic features such as mood or behavioral disturbance.

The most frequent neoplasms associated with PLE are SCLC, testicular tumors, breast cancer, Hodgkin’s lymphoma, and thymoma. SCLC makes up the majority of cases. Up to 60% of patients do not have the diagnosis of cancer at presentation, with neurologic symptoms preceding the discovery of tumor by weeks to months.

Serologic markers for PLE are anti-Hu in small cell lung cancer and anti-Ta in patients with testicular cancer. Identification of these markers coupled with the characteristic MRI finding helps establish the diagnosis.

Typical MRI findings include unilateral or bilateral mesial temporal lobe hyperintensity on T2 weighted images or FLAIR. On T1 sequences, the mesial temporal lobes may be hypointense. Herpes simplex encephalitis may have similar findings in early stages of disease. However, the patients usually develop mass effect and signs of edema. Herpes encephalitis is an acute febrile illness whereas PLE is a subacute illness. This fact makes clinical correlation particularly important.

Treatment is primarily at targeting the primary malignancy.
Pubblicato da David Spizzichino a 16:00