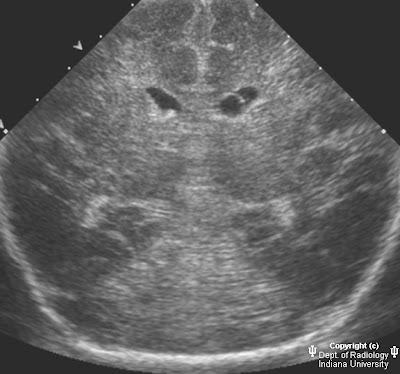 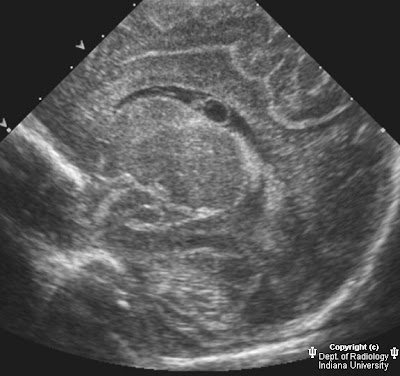 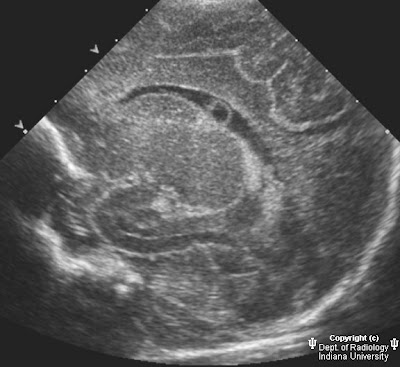 The patient has an approximately 6-7 mm choroid plexus cyst.

Choroid plexus cysts are a relatively frequent finding on obstetrical sonographic imaging with an incidence of 0.2 to 2.5%. They are thought to occur due to folding of the neuroepithelium with trapping of secretory products and desquamated cells. On histological evaluation of these choroids plexus cysts, there is no epithelial lining, and they are usually filled with clear colored fluid which may have some debris.

Management of the pregnancy upon detection of these cysts is controversial. Almost 90% of choroids plexus cysts resolve by the 28th week of gestation. In over 95% of the patients, there is no clinical significance. However, the decision to perform amniocentesis is based on the results of the serum triple screen results (Edward syndrome = low maternal AFP, low HCG, low estiol), maternal age, and the presence of any other anatomic abnormalities. In the presence of any other anatomic abnormality and choroid plexus cysts, there is a 4% incidence of Edward syndrome. Some obstetricians will order follow-up obstetrical ultrasounds to evaluate for resolution of these cysts. However, even if the choroid plexus cysts resolve, there is no effect on the reduction of likelihood of karyotypic abnormalities.

Ultrasound is the widely accepted standard radiological imaging modality for obstetrical fetal anatomy survey. Part of the standard set of sonographic images obtained during the fetal intracranial survey include an "axial" image plane through the lateral ventricles for purposes of ventricular measurement to exclude hydrocephalus. The choroid plexus is often the most echogenic structure within the head. Choroid plexus cysts most often appear as well circumscribed anechoic structures within the brightly echogenic choroid plexus tissue located in the atria of the lateral ventricles. Identification of these cysts should prompt a thorough sonographic evaluation for other potential anomalies including an enlarged cisterna magna or myelomeningocele, omphalocele, or extremity malformations.

Choroid plexus cysts can also be seen on fetal MRI examinations. On MR, these cysts will follow fluid signal intensity which will be low on T1 and bright on T2 image sequences.
Pubblicato da David Spizzichino a 16:00