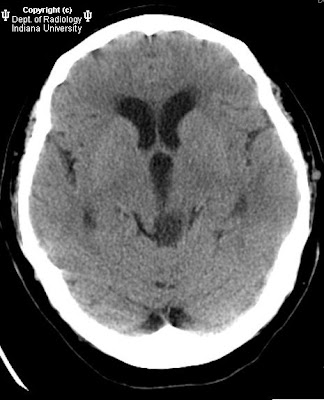 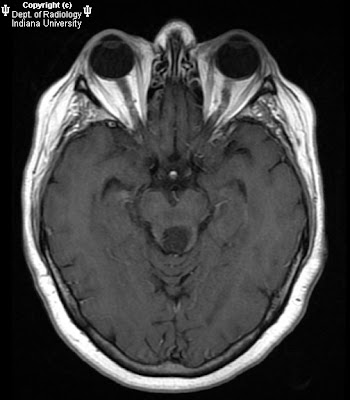 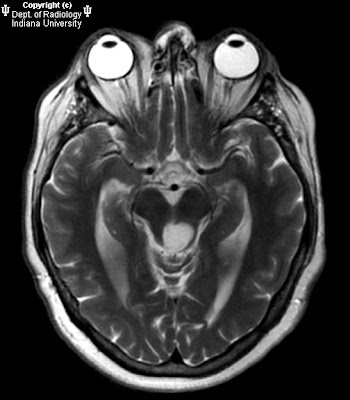 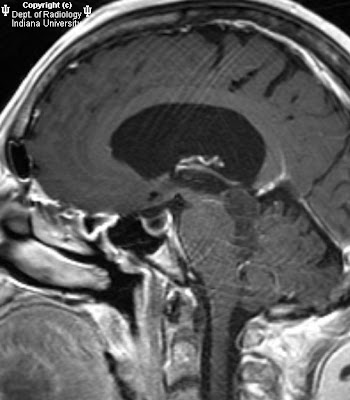 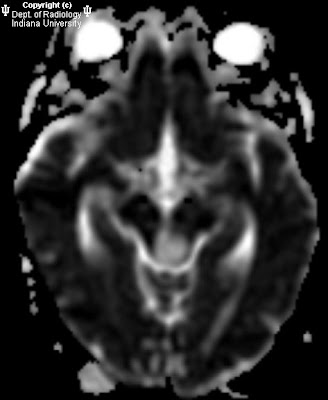 Lateral ventricles and third ventricle are dilated. A mildly heterogeneous low density mass involves the dorsal aspect of the midbrain near the anticipated position of the pineal gland and cerebral aqueduct . MR confirms a mass in the region of the cerebral aqueduct extending into the fourth ventricle inferiorly and superiorly into the region of the posterior third ventricle. Closely following CSF, the mass demonstrates decreased T1 signal and increased T2 signal. There is restricted diffusion. There is no associated abnormal enhancement on the C+ sagittal images.

They most commonly present with headaches and possibly with cranial nerve palsies, typically of the 5th, 7th, and 8th nerves. They may remain clinically silent for many years. There is no gender predilection. Their presentation peaks at age 40 and has a range of 20 – 60 years of age.
As the have epithelia components they grow slowly. They can cause chemical meningitis if they leak and rarely have been reported to undergo malignant transformation to squamous cell carcinoma.
Treatment involves microsurgical resection which can be complicated by encasement of surrounding structures. Recurrence is common if they are not completely resected and seeding of the subarachnoid space has been reported.

Epidermoid typically follow CSF density and may encase surrounding structures. Most commonly they are found in the CP angle (40-50%). They can also commonly be found in the fourth ventricle and middle cranial fossa, typically para-sellar. Occasionally they can be found within the skull and spine.
CT findings: Most are hypo dense, although 10-25% will have calcifications. They typically do not show post contrast enhancement however may have minimal enhancement at the margin. There is a rare variant which may be dense secondary to hemorrhage or high protein.
MRI findings: Again they are similar to CSF on T1 and T2 pulse sequences. On T1 they are slightly hyper intense to CSF and on T2 they are isointense to slightly hyper intense to CSF. Intensity will be altered depending on the cyst contents. Minimal enhancement can be seen at the margins. They key distinguishing feature is the appearance on diffusion weighted images which is markedly intense, "light bulb bright". On ADC mapping they are isointense to brain parenchyma.
The differential diagnosis includes arachnoid cyst, which follow CSF signal on all sequences and does not show restricted diffusion. Arachnoid cysts typically displace adjacent structures whereas epidermoid lesions encase them. Cystic neoplasm's often enhance and do not follow CSF signal. Dermoid cysts are typically heterogeneous on MR and more closely follow fat signal characteristics. Additionally dermoid are typically midline. Inflammatory cysts typically enhance and have surrounding edema and/or gliosis.
Pubblicato da David Spizzichino a 16:00