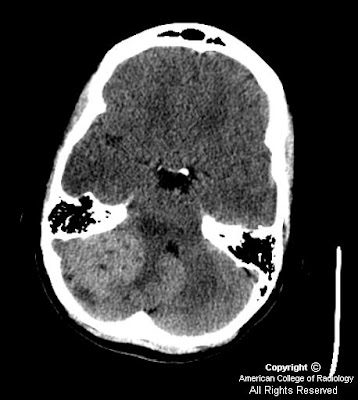 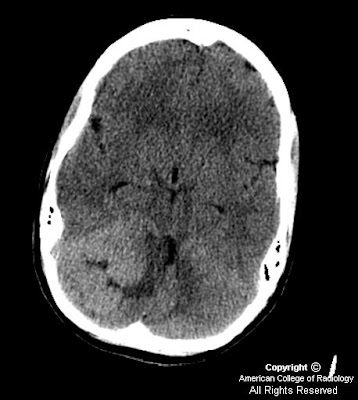 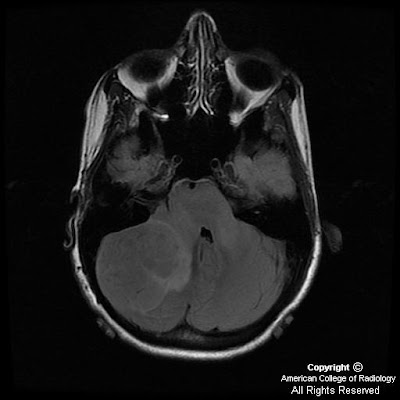 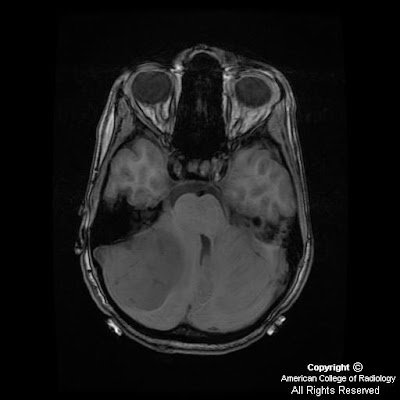 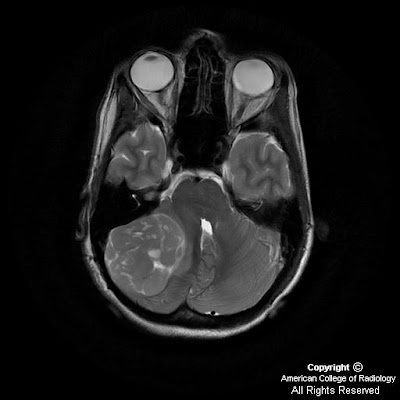 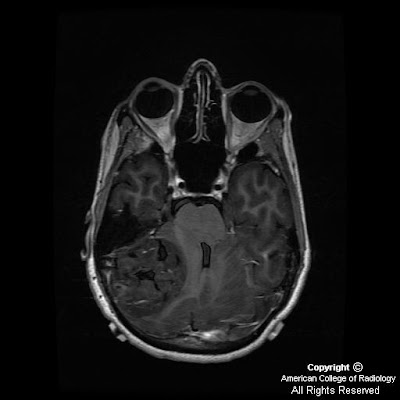 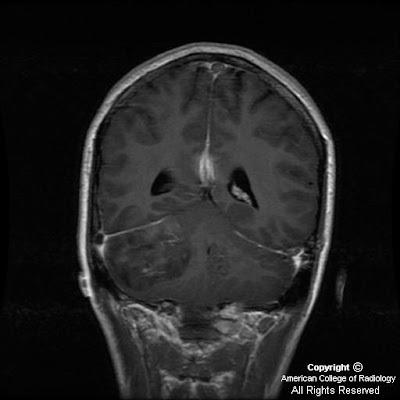 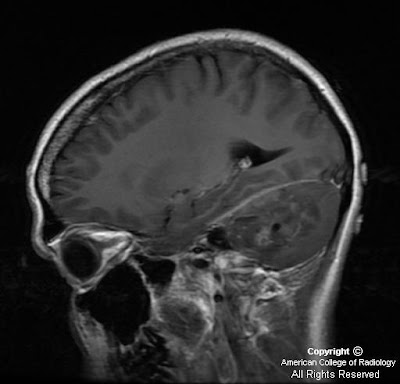 Headache, vomiting, ataxia, and visual deterioration are common presenting symptoms. Hemiataxia is a frequent finding in adults because of the hemispheric location of most tumors. Gait ataxia, papilledema, nystagmus, facial palsy, and neck stiffness are also common. Most (75%) patients have symptoms for less than 3 months and without treatment, medulloblastoma causes death within a few months after presentation.

A well defined homogenous vermian mass is the most common presentation of medulloblastoma in children. By comparison, the most common presentation of adult medulloblastoma is that of a poorly defined, heterogeneous hemispheric tumor with evidence of cystic and necrotic degeneration. Approximately half of adult medulloblastomas originate in a cerebellar hemisphere, are hyperdense on unenhanced CT, and show minimal enhancement after injection of contrast medium. This is most likely because of the higher prevalence of desmoplastic lesions in adults. The characteristic hyperattenuation on unenhanced CT scans reflects the high nuclear-cytoplasmic ratio seen at histologic analysis.

The tumor typically appears heterogeneous on images, findings that are related to cyst formation, hemorrhage, and calcification and that are even more pronounced with magnetic resonance (MR) imaging. As in adults, medulloblastoma has a variable MR appearance in children, On T1-weighted images, tumors are hypo- or isointense relative to cortex and on T2-weighted images, they are hypo-, iso-, or hyperintense. Evidence of leptomeningeal metastatic spread is present in 33% of all cases at the time of diagnosis and is well evaluated with contrast-enhanced MR imaging of the brain and the spine.

Although conventional MR imaging is helpful in distinguishing among infratentorial brain tumors, newer techniques, such as diffusion-weighted imaging (DWI) further faciliate this distinction. DWI provides information that cannot be obtained with conventional MRI. DWI evaluates the microscopic rate of water diffusion within tissues. It can identify different tumor types and delineate their boundaries with normal tissue. For instance, medulloblastoma will have increased signal intensity or restricted diffusion on DWI. In contrast, pilocytic astrocytoma shows no restricted diffusion on DWI.

The differential diagnosis for a posterior fossa mass include metastasis, hemangioblastoma, astrocytoma, lymphoma, and dysplastic cerebellar gangliocytoma (Lhermitte-Duclos disease). Lateral tumors in adults often appear extraaxial and may simulate meningiomas of the cerebellopontine angle or tentorium, acoustic neuromas, ependymomas, glomus jugulare tumors or metastases, solid hemangioblastoma and choroid plexus papilloma. Metastasis is the most common cerebellar mass in the adult population and hemangioblastoma is the most common primary neoplasm of the cerebellum in adults.

Surgical resection, radiation therapy, and chemotherapy have substantially lowered the mortality associated with this tumor, with 5-year survival rates now commonly well above 50%. The practice of using staging data developed for childhood medulloblastoma to determine risk for recurrence and poorer prognosis may not be valid in the adult population. The current standard of care remains surgical resection of the primary neoplasm followed by craniospinal irradiation. The optimal use of adjuvant chemotherapy remains unclear, but may be best reserved for patients with CNS or extraneural metastasis at diagnosis.
Pubblicato da David Spizzichino a 16:00