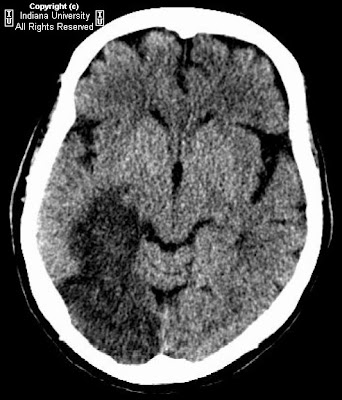 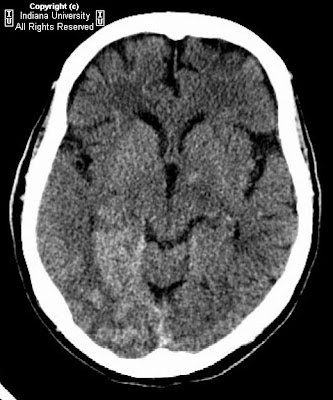 Interval near normalization of hypo densities in the right posterior cerebral artery distribution and right thalamus in the area of previously noted infarction. This is likely represents fogging secondary to luxury perfusion. Areas of increased density may represent laminar necrosis and petechial hemorrhage.


Following infarction, there may be normalization of previous hypo density secondary to luxury perfusion. This typically occurs 2-4 weeks following the acute event. If given contrast, the area will intensely enhance homogeneously. The fogging effect occurs during the resorption stage when macrophages phagocytize necrotic material. There is loss of edema and associated mass effect. As the phagocytized material is altered and the macrophages later exit, the infarcted area becomes increasingly hypodense and finally cystic. The fogging effect is to be distinguished from the normalization of density in a low density infarct secondary to the administration of intravenous contrast.
Pubblicato da David Spizzichino a 16:00