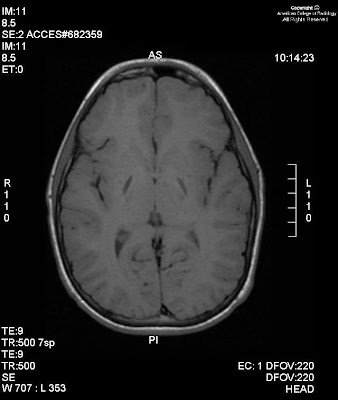 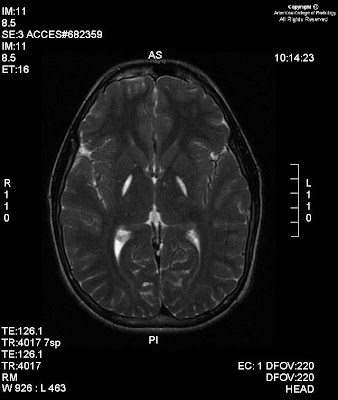 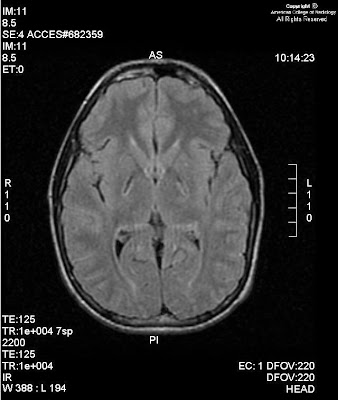 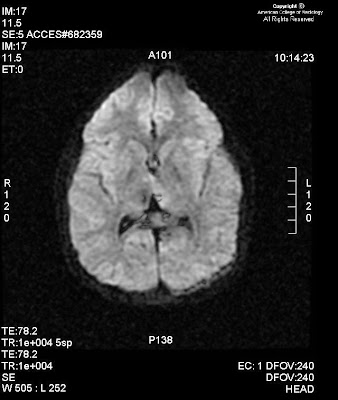 There are oblong areas of hypointense T1, hyperintense T2 signal in the bilateral globus pallidus (Figure 1 and Figure 2). Figure 3 is a FLAIR image which does not demonstrate edema in this region. Figure 4 is a diffusion weighted image which does not show restricted diffusion, essentially excluding acute infarction.

Briefly, isoleucine, valine, methionine, and threonine are normally converted to propionic acid, methylmalonic acid, and succinic acid, the last step of which requires methylmalonyl CoA mutase and a coenzyme, adenosyl cobalamine. A deficiency in either the enzyme or coenzyme, in an autosomal recessive manner, results in the accumulation of methylmalonic acid. This build up results in the inhibition of succinate dehydrogenase; this enzyme facilitates mitochondrial aerobic glucose oxidation. The globus pallidus is particularly sensitive to mitochondrial dysfunction.

Deficiency in methylmalonyl CoA mutase generally produces earlier onset of symptoms and a more severe course with a mean survival time of 1.5 to 6.4 years.

Neuroimaging in these patients ranges from normal, with a subtle MR spectroscopy finding of elevated CSF lactate, to chronic infarction in the globus pallidus. In general, prominence of the ventricles and sulci with delayed white matter myelination may be seen. In our case, the patient was found to have chronic infarctions of the bilateral globus pallidus without additional parenchymal findings. In cases of suspected methylmalonic academia, correlation with genetic studies may be confirmatory.
Pubblicato da David Spizzichino a 16:00