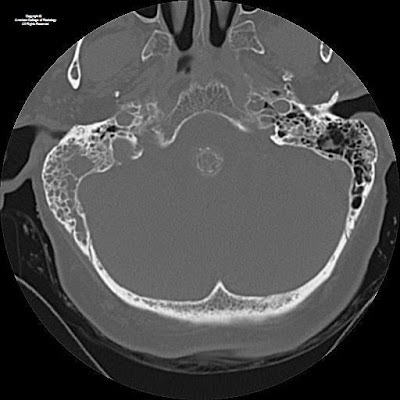 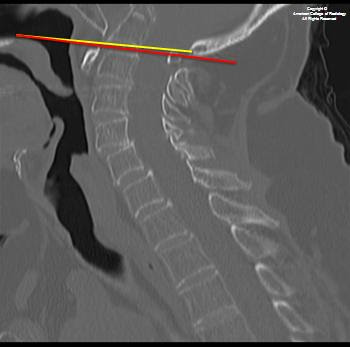 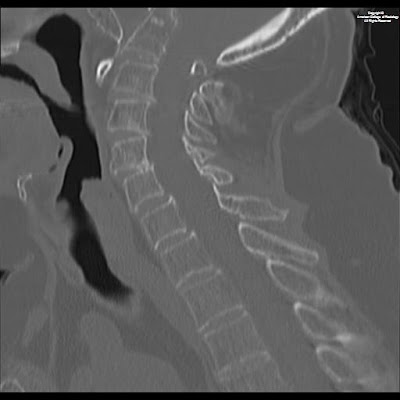 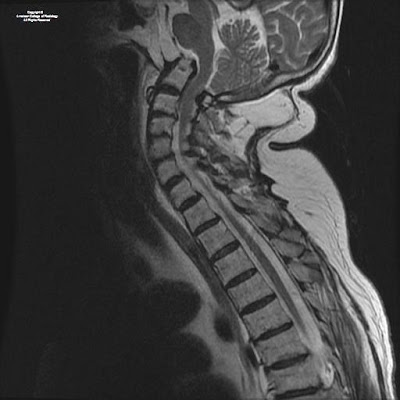 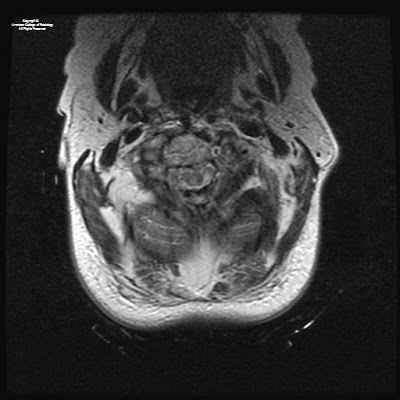 Axial and sagittal CT images demonstrate severe basilar invagination (Figure 1). The tip of the odontoid process measures 2.3 cm above Chamberlain’s line (yellow line in Figure 2). McGregor's line (red line in Figure 2) is also shown. Incidentally noted are right-sided opacified mastoid air cells (Figure 1).
Once again, severe basilar invagination is evident. On the sagittal T2 image the foramen magnum is narrowed and obliteration of the CSF space is noted at the C2-C3 level (Figure 3). On the axial T2 weighted image increased T2 signal (Figure 4) is seen within the cord at the C2-C3 level indicating edema versus myelomalacia.

Clinical manifestations of basilar invagination include posterior skull pain, headache, signs and symptoms of brainstem and upper cervical cord compression or disturbances of CSF circulation causing obstructive hydrocephalus. The brainstem may be compressed at the level of the foramen magnum possibly resulting in compromise of the autonomic centers resulting in labile blood pressures, arrhythmias, or sudden death. Neurosurgery is recommended in patients that are symptomatic with concomitant MRI findings indicating compression. Although asymptomatic patients are often followed conservatively, many authors favor surgery even if no symptoms of cord compression are evident in rheumatoid patients.

Although often appearing together, basilar invagination or impression should not be confused with platybasia; which literally means “flattening of the base of the skull”. Platybasia, which can be seen in Klippel-Feil anomalies, cleidocranial dysplasia and achondroplasia, is present when the basal angle formed by intersecting lines from the nasion to the tuberculum sellae and from the tuberculum along the clivus to the anterior aspect of the foramen magnum (basion) is greater than 143 degrees.
Pubblicato da David Spizzichino a 16:00