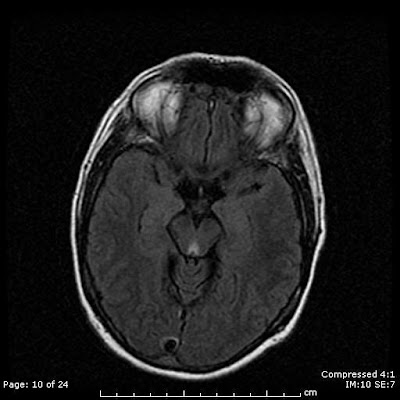 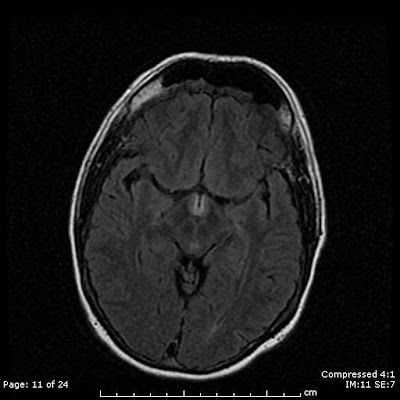 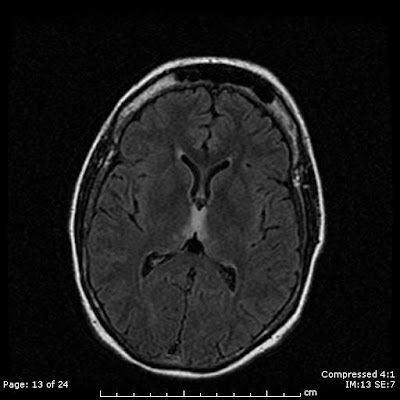 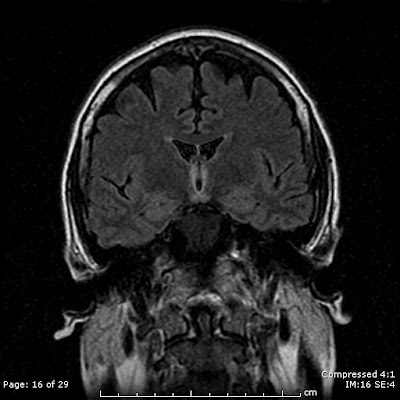 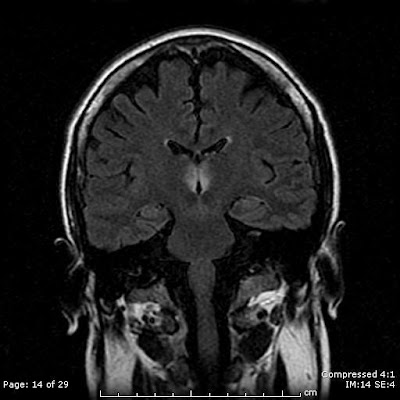 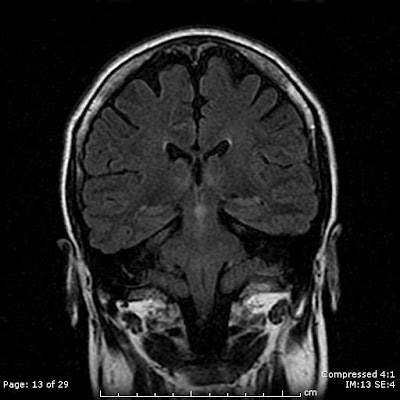 On axial images, abnormal FLAIR signal is demonstrated at the pontomedullary junction adjoining the fourth ventricle, periaqueductal gray matter in the pons and midbrain (Figure 1), the superior aspect of the mamillary bodies (Figure 2), the tissue surrounding the third ventricle and the medial thalami (Figure 3).
On coronal slices, abnormal FLAIR signal again appears in the mamillary bodies (Figure 8), in the tissue surrounding the third ventricle (Figure 8 and Figure 10), medial thalami (Figure 10), and periaqueductal gray matter (Figure 11).


Wernicke’s encephalopathy is caused by thiamine deficiency, most often seen in chronic alcohol abuse. It has also been described in anorexia nervosa, prolonged starvation, hyperemesis gravidarum, patients on long-term hemodialysis, and patients with AIDS. Patients with this condition classically present with the triad of ataxia, acute mental confusion, and oculomotor dysfunction, although a minority (16-38%) of patients with the condition present with all three elements. If the symptoms also include amnesia and confabulation, then these manifestations are called Korsakoff syndrome. Wernicke’s encephalopathy is a significantly disabling and potentially lethal condition that can be prevented and reversed if treated early with thiamine supplementation.

On CT and MR imaging the brain demonstrates diffuse cerebral and cerebellar atrophy. Mamillary body enhancement or abnormal T2 signal may be the sole manifestation of Wernicke’s encephalopathy. Other typical MR findings include symmetric high T2 signal and variable enhancement within the periaqueductal gray matter of the midbrain, the tectal plate, the mamillothalamic tract, the thalami, and the tissue surrounding the third ventricle. The mamillary bodies may also show atrophy in patients with chronic Wernicke’s encephalopathy, though this finding can also be present in chronic alcoholic patients without Wernicke’s syndrome. Atypical changes may also be seen, almost always in non-alcoholic patients, and may include signal changes in cranial nerve nuclei, basal ganglia, cerebellum and dentate nuclei, the splenium, and frontal and parietal cortex. These atypical findings are very similar to the pattern seen in metronidazole-induced encephalopathy, and it is has been hypothesized that the two syndromes share a common metabolic pathway. The reason why these brain regions are more affected by thiamine deficiency is poorly understood, but it is speculated that they may be characterized by more intense thiamine metabolism.
Pubblicato da David Spizzichino a 16:00