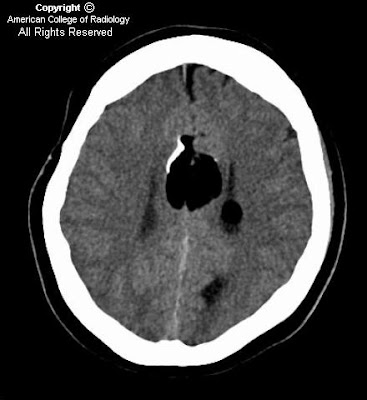 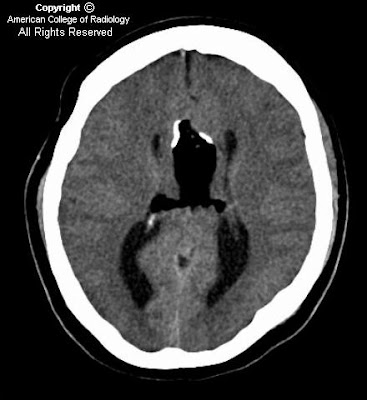 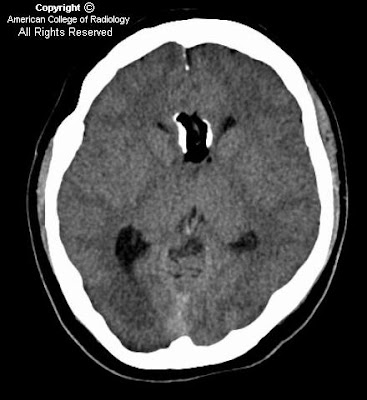 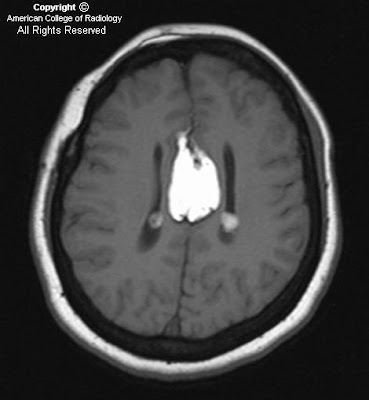 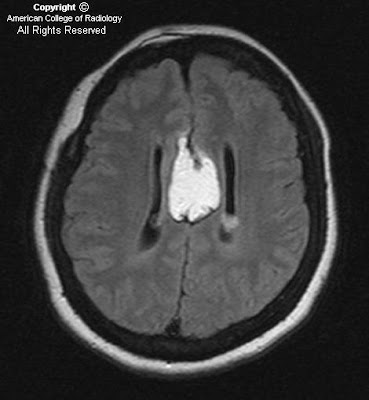 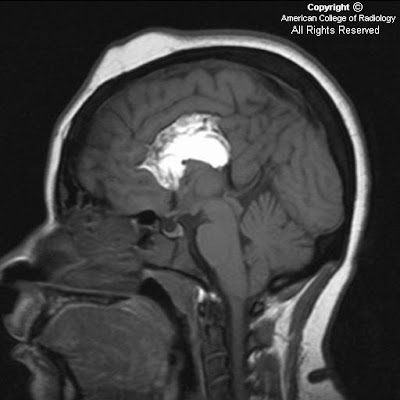 Nonenhanced axial CT demonstrates a well-defined, very low attenuation (fat) mass in the region of the roof of the third ventricle/genu of the corpus callosum. More inferiorly (Figure 2 and Figure 3), extension of the mass through the foramina of Monroe is noted (Figure 2). There are bilateral linear calcifications, which are classic for callosal lipoma (Figure 1, Figure 2, and Figure 3). In addition, there is parallel alignment of the lateral ventricles, suggestive of dysgenesis of the corpus callosum. There is also prominence of the occipital horns of the lateral ventricles (Figure 2), termed colpocephaly.
Axial T1 (Figure 4) weighted MR image through the center of the mass demonstrates a homogeneous very high signal mass in the region of the genu of the corpus callosum. Parallel orientation of the lateral ventricles is again seen. Incidentally noted is a large scalp lipoma.
Axial FLAIR (Figure 5) MR image in the same location demonstrates the callosal mass and the the scalp lipoma.
Sagittal T1 (Figure 6) weighted MR image in the midline demonstrates a fat intensity mass with absence of the corpus callosum. In addition, the cerebellar tonsils protrude approximately 5 mm below the level of the foramen magnum (blue arrow), consistent with a Chiari I malformation. Another scalp lipoma is also noted.


CNS lipoma is an uncommon congenital lesion and constitutes less than 1% of brain tumors. Its most frequent location is the genu of the corpus callosum, tuber cinereum, and quadrigeminal plate cistern. The optic chiasm, interpeduncular cistern, sylvian fissure, cerebellopontine angle, and cerebellomedullary cisterns are less common locations.

CNS lipoma has the classic appearance of a discrete fatty mass. It often (especially when located within the corpus callosum) has a calcified rim, which can form a “bracket sign” on frontal radiographs, and this appearance is pathognomonic. It is very low attenuation on CT, homogeneously high in signal on T1- and T2-weighted MR images, and demonstrates no enhancement.

Approximately half of patients are asymptomatic at the time of discovery. Agenesis of the corpus callosum can be associated with colpocephaly, the disproportionate dilation of the occipital horns of the lateral ventricles compared to the frontal horns. This is felt by most to be due to decreased brain volume within the posterior fossa. However, colpocephaly and hydrocephalus can coexist, and the frontal and temporal horns should be carefully evaluated in the context of the clinical presentation.

There is a known association between callosal agenesis and other midline defects, including Chiari malformations, Dandy-Walker cyst, encephalocele, and others. A careful search should be undertaken for these congenital anomalies in any patient with callosal agenesis. In this patient, multiple scalp lipomas were also noted, raising the possibility of a lipomatosis syndrome.
Pubblicato da David Spizzichino a 16:00