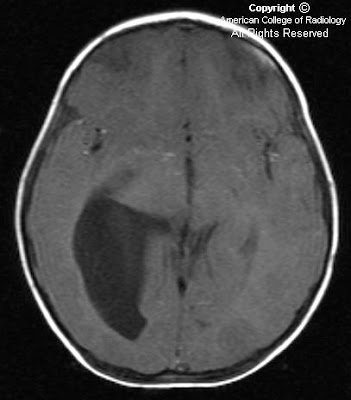 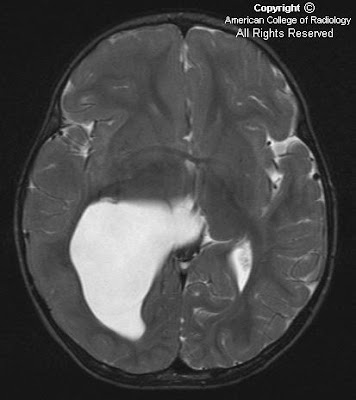 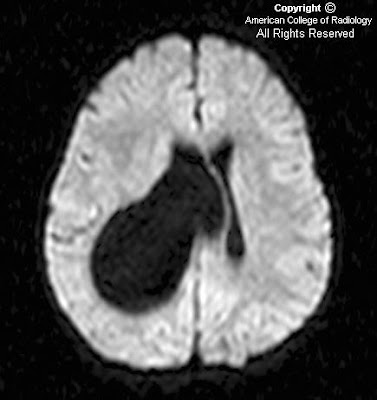 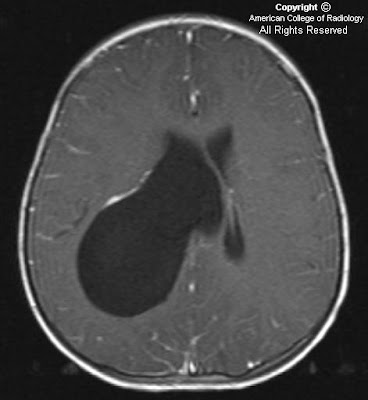 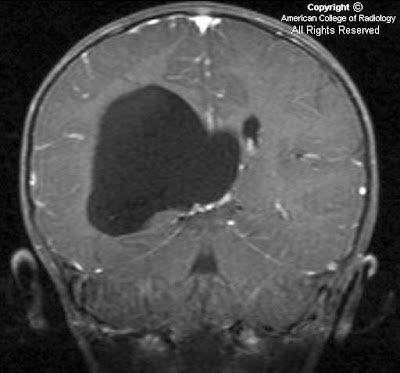 Figure 1: Axial T1 weighted image shows a large well defined homogenous mass in the right lateral ventricle which is isointense with CSF and arises from the atrium and measures 8.8 cm by 4.2 cm by 6.0 cm. There is dilatation of the right occipital horn and midline shift to the contralateral side indicating mass effect.
Figure 2: Axial T2 weighted image demonstrates that the mass is again isointense with CSF, indicative of cyst. The thin regular cyst wall is visualized. There is no edema in the adjacent brain parenchyma.
Figure 3: Diffusion-weighted image illustrates no evidence of restricted diffusion. The fluid within the cyst has the same diffusion characteristics as CSF.
Figure 4: Axial T1 weighted postgadolinium image shows no abnormal enhancement. Note the compressed vasculature adjacent to the cyst.
Figure 5: Coronal T1 weighted post gadolinium image depicts the large cyst in the right lateral ventricle.


Ependymal cysts are rare intracranial lesions that are found in the brain parenchyma, ventricles, and subarachnoid space. The cysts are most often juxtaventricular in location within the brain parenchyma involving the frontal or temporal lobes. They are less often found within the ventricles with the lateral ventricles being the most common. Subarachnoid ependymal cysts are extremely rare. The origin of the cysts is unknown, but they are thought to originate from invagination of neuroectoderm, and the cysts are lined with either cuboid or columnar epithelium.

Ependymal cysts are typically found in young males in their 30s and 40s. The cysts are usually asymptomatic and are incidental imaging findings, but when symptomatic, patients will present with headache, seizures, or dementia. On CT imaging, the thin cyst wall may not be visible, and the cystic fluid is of the same density as CSF. There is no enhancement following contrast administration. On MR imaging, the cystic fluid will be isointense to CSF on all pulse sequences. Sometimes the cyst may have a proteinacous content, due to mucinous secretion by the epithelial cells that line the cyst, which is represented by an increase in signal intensity best seen on FLAIR images. The cyst wall is often visible on MR, but its absence does not exclude the diagnosis. The cyst will not show restricted diffusion, and similar to CT, there will be no enhancement following contrast administration. Ependymal cysts of widely variable sizes have been reported, and large cysts may obstruct CSF flow and cause hydrocephalus.

Prognosis for ependymal cysts is excellent. Since most cysts are asymptomatic, patients can be followed conservatively. Cysts that are symptomatic require either surgical decompression or excision. Recurrence after surgical excision is rare.

The patient in this case is particularly interesting due to his extremely young age and symptomatic presentation. He was managed surgically with placement of a cystoperitoneal shunt catheter and has been seizure free since his hospital discharge.
Pubblicato da David Spizzichino a 16:00