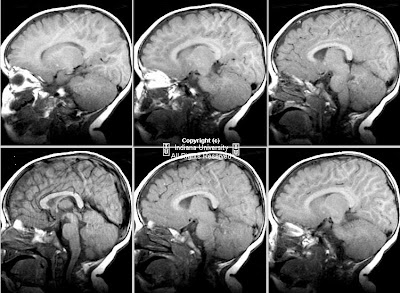 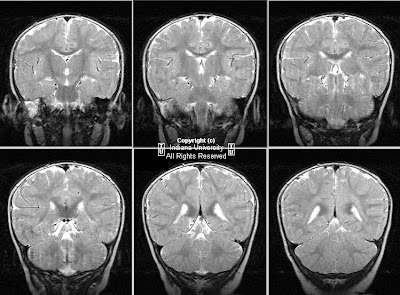 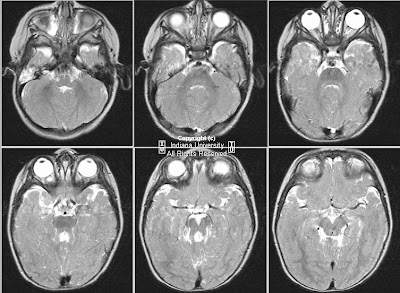 There is elevation of the fourth ventricle and hypoplasia of the superior portion of the vermis. There is thickening of the superior cerebellar peduncles bilaterally. These form a characteristic "molar tooth" sign as seen on axial images.

The syndrome was first described by Joubert and colleagues as a familial agenesis of the cerebellar vermis and appears to be inherited as an autosomal recessive trait. Both sexes are affected and the onset is in early infancy. Its incidence is unknown. Most patients die in infancy or early childhood. The predominant abnormality in Joubert's syndrome is aplasia or hypoplasia of the vermis, particularly the superior portion. In addition, these patients have heterotopic and dysplastic cerebellar tissue, abnormal development of the inferior olivary nuclei, and incomplete formation of the pyramidal decussation.

The most common features of Joubert's syndrome in infants include hyperpnea, jerky eye movements, and ataxia. The facial appearance in patients with Joubert syndrome may be near-normal, or may include high, rounded eyebrows, broadening of the nasal bridge, and mild epicanthus. The nares may be anteverted, and the mouth triangularly shaped.

Some patients with Joubert syndrome are severely affected, dying in infancy. The vast majority (> 90%) of surviving patients with Joubert syndrome are below chronological age in cognitive and motor development, although in a few patients, cognition may appear near-normal. CNS anomalies reported with Joubert's syndrome include callosal dysgenesis, congenital retinal dystrophy, and oculomotor abnormalities. Non-CNS disorders include neonatal breathing abnormalities, polydactyly, and cystic kidney disease.

Sagittal T1W images demonstrate a diminutive vermis. Axial images in particular show an enlarged fourth ventricle that is "bat-wing shaped" in configuration. The superior cerebellar peduncles are vertically oriented and elongated in the anteroposterior direction. Because of the dysgenesis of the vermis, the hallmark of Joubert's syndrome is separation or disconnection of the cerebellar hemispheres, which are apposed but not fused in the midline. The midbrain is small in its anteroposterior diameter, probably because of the absence of the decussation of the superior cerebellar peduncles. The characteristic appearance of the midbrain, with the enlarged superior cerebellar peduncles and the absence of their decussation has been called the "molar tooth sign". Associated supratentorial anomalies are uncommon, but cerebral cortical dysplasia and gray matter heterotopia have been reported.

The prognosis for infants with Joubert's syndrome depends on whether or not the cerebellar vermis is entirely absent or partially developed. Some children have a mild form of the disorder, with minimal motor disability and good mental development, while others may have severe motor disability and moderate mental retardation. Treatment for Joubert syndrome is symptomatic and supportive. Infant stimulation and physical, occupational, and speech therapy may benefit some children. Infants with abnormal breathing patterns should be monitored. 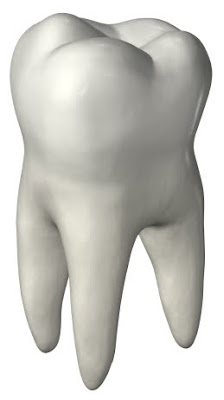