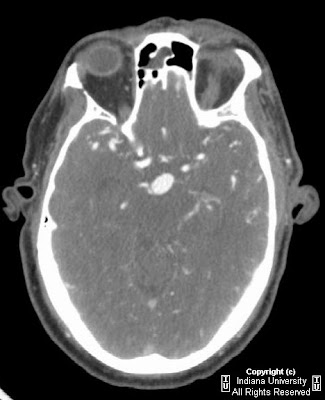 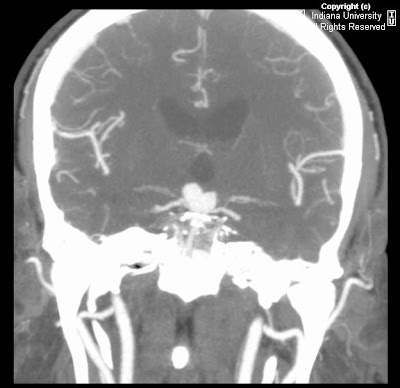 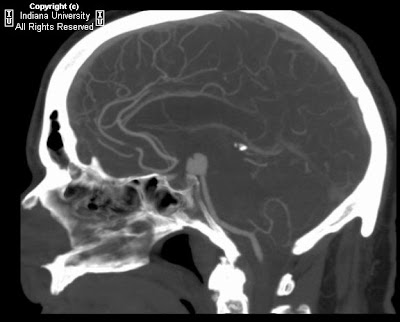 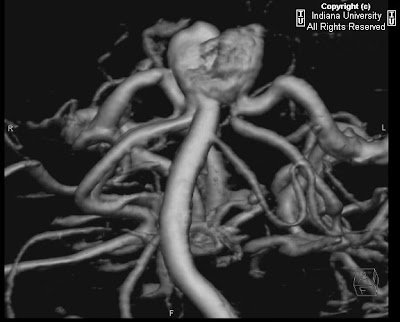 Head CT without contrast shows diffuse subarachnoid hemorrhage, most prominent around the basilar tip but also involving the right Sylvian fissure the anterior interhemispheric fissure. There is also intraventricular blood. CT Head angiography with 3D reconstruction shows a large bilobed aneurysm of the basilar tip. The aneurysm neck extends into the left P1 segment. The left superior cerebellar artery arises from the P1 segment, and therefore the aneurysm incorporates both the left superior cerebellar artery and P1 segment.

Saccular aneurysms (i.e. berry aneurysms) are true aneurysms that occur at intracranial bifurcation points, most commonly within the circle of Willis. Although previously thought to be congenital in origin, recent studies suggest that most intracranial aneurysms develop as a result of hemodynamic-induced vascular injury.

The incidence of intracranial aneurysms is estimated to be near 1-6% of the population. These percentages increase in patients with congenital anomalies of the intracranial vasculature (fenestrations, persistent trigeminal arteries), vasculopathies (fibromuscular dysplasia), connective tissue disorders (Marfan, Ehlers-Danlos), polycystic kidney disease, coarctation of the aorta, or vascular malformations. Factors associated with increased risk of aneurysm rupture include cigarette smoking, female gender, and younger age at diagnosis.

The risk of aneurysm hemorrhage remains unknown. For many years, a bleeding risk of 1-2% per year was quoted in the literature, and this number remains reported in current investigations. However, a recent study (The International Study of Unruptured Intracranial Aneurysms) found that the risk of aneurysm hemorrhage was quite variable and dependent upon key factors: size, location, and history of prior aneurysm rupture. For example, anterior circulation aneurysms measuring less than 7 mm in a patient without a history of aneurysm hemorrhage had less than 0.05% risk of bleed per year. Unfortunately, basilar tip aneurysms larger than 10 mm and aneurysms in patients with a prior history of an aneurysm bleed were associated with a much higher risk of rupture of 0.5% per year.

When non-contrast head CT demonstrates subarachnoid hemorrhage in the suprasellar cistern, Sylvian fissures, and anterior interhemispheric fissure, an aneurysmal etiology should be highly suspected. Three primary modalities are utilized to image intracranial aneurysms - CTA, MRA, and catheter angiography. CTA and MRA are the modalities of choice for imaging of unruptured aneurysms. Traditionally, catheter angiography has been preferred for imaging of patients presenting with non-traumatic subarachnoid hemorrhage. However, CTA alone is gaining in popularity for these cases.

CTA with 3-D reconstruction: Recent studies suggest that CTA is a quick, reliable, and relatively simple diagnostic modality for imaging of intracranial aneurysms. Some reports indicate that the sensitivity of CTA for detection of aneurysms < 5mm is higher than catheter angiography. Advantages include inter-operator reliability and non-invasiveness.

MRA: MRA is typically used in combination with conventional MRI and used to screen patients with risk factors for intracranial aneurysm. MRA currently has a low sensitivity for aneurysms less than 4 mm in size.
Pubblicato da David Spizzichino a 16:00