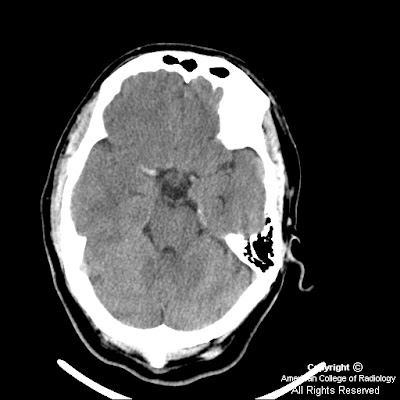 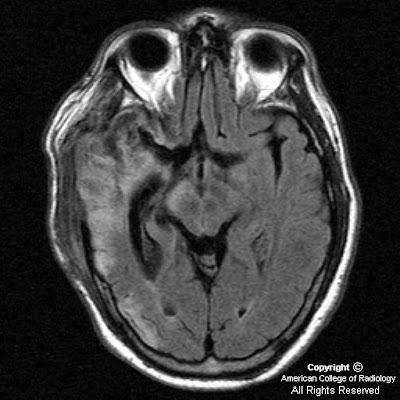 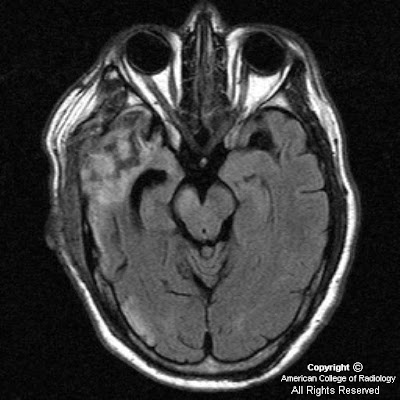 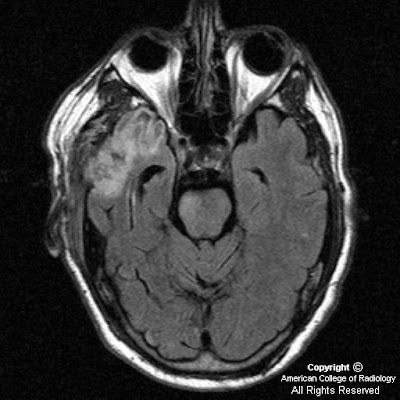 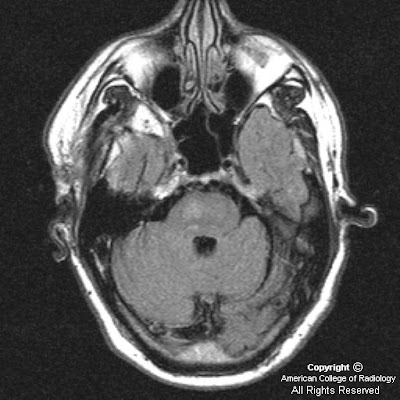 Figure 1: Noncontrast brain CT demonstrates a "dense MCA sign" in the M1 segment with loss of grey-white differentiation involving a large portion of the MCA territory.
Figure 2, Figure 3, Figure 4, and Figure 5 : T2-weighted FLAIR images obtained 60 days after the initial infarct demonstrate decrease in cytotoxic edema, evolution of intraparenchymal hemorrhage, and ex vacuo dilatation of the right lateral ventricle. Following the right corticospinal tract caudally, there is increased T2 signal to the level of the pons representing gliosis as well as atrophy of the cerebral peduncle, compatible with Wallerian degeneration.


Wallerian degeneration is antegrade destruction of axons and myelin sheaths following damage to the proximal portion of the axon or the cell body. The most common cause of Wallerian degeneration in the brain is infarction. Other causes include hemorrhage, trauma, neoplasm, and white matter disease. Dead tissue is phagocytized with resultant gliosis throughout the affected white matter tract, which can be visualized as hyperintensity on FLAIR sequences. There is no enhancement after contrast administration. Wallerian degeneration can be demonstrated 2-6 months after the initial insult, often as an atrophied cerebral peduncle with increased T2 signal along the involved corticospinal tract.

Wallerian degeneration of the corticospinal tract (or pyramidal tract) indicates severe damage and thus marked motor function impairment. It has been shown that progressive Wallerian degeneration as demonstrated on MRI is associated with persistent moderate to severe hemiparesis.
Pubblicato da David Spizzichino a 16:00