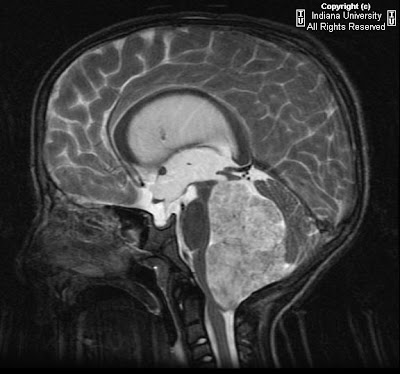 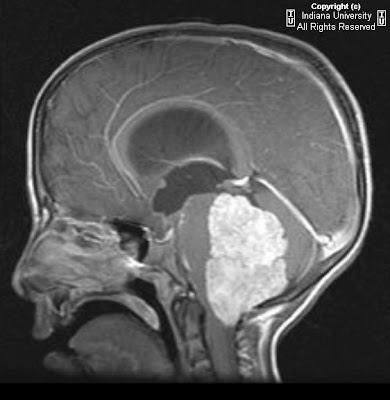 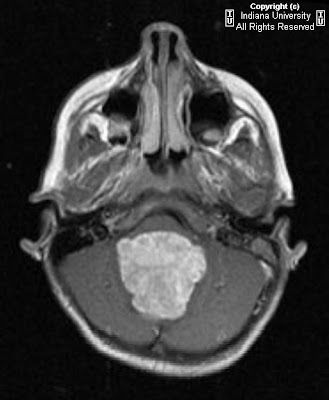 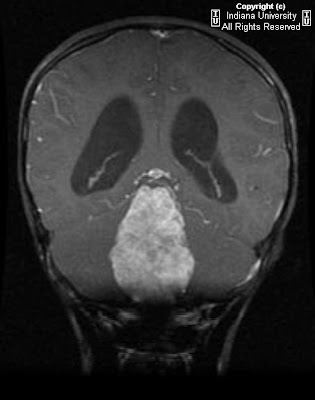 MRI imaging demonstrates a large, 7 x 4 x 4 cm (craniocaudal, AP, and transverse) heterogeneous mass within the 4th ventricle, with associated marked obstructive hydrocephalus. This mass extends below the 4th ventricle into the foramen magnum. There is no significant surrounding cerebellar edema.

Choroid plexus papilloma is a relatively rare pediatric intracranial neoplasm, accounting for approximately 3% of such tumors.
Most common in patients under 1 year of age, and more common in males.
Arise from cuboidal epithelium of choroid plexus.
Associated with Li-Fraumeni and von Hippel Lindau syndromes.
Increased intracranial pressure can result from both tumor secretion of CSF, as well as by CSF outflow obstruction due to the intraventricular mass.
Presenting symptoms may include headache, N/V, ataxia, visual changes, or drowsiness.
On CT and MR, typical findings include a heterogeneously enhancing mass, potentially with cystic areas. On CT, punctuate calcifications may be seen in up to 20% of cases.
Treatment is typically by attempted total resection.
Pubblicato da David Spizzichino a 16:00