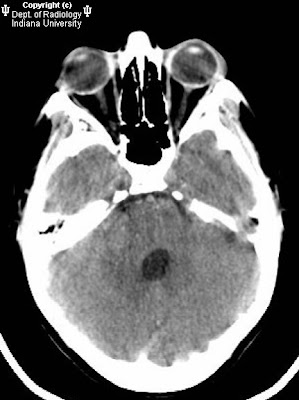 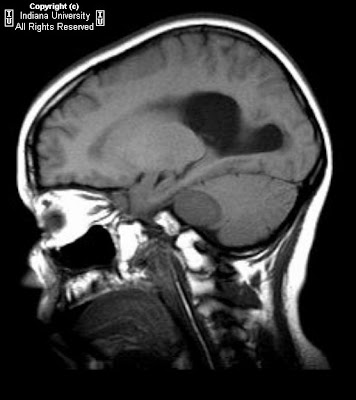 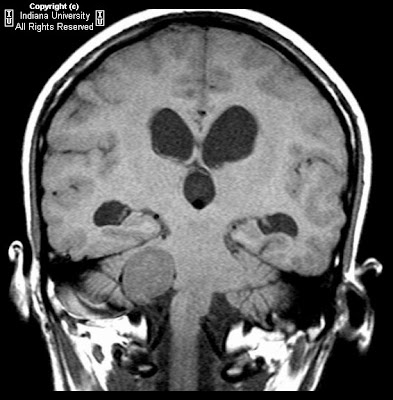 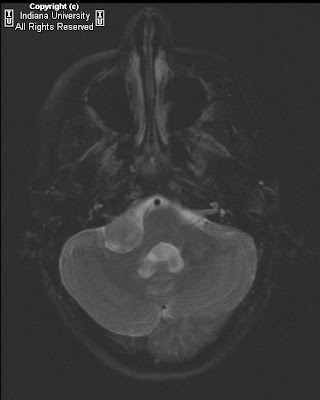 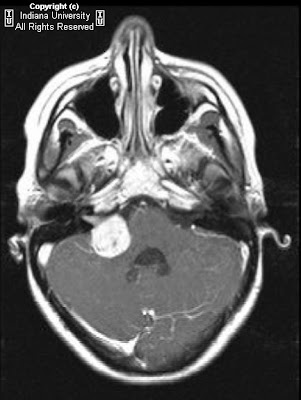 Meningioma is the second most common CPA mass and may mimic a vestibular schwannoma. They are benign, unencapsulated neoplasm arising from meningothelial arachnoid cells of CPA-IAC dura. On CT, meningiomas will appear as a calcified dural based mass eccentric to the IAC with a positive meningeal sign, i.e. enhancement of the meningeal tail. 90% will have strong, uniform enhancement on contrasted CT studies. Vestibular schwannomas will not calcify and are centered on the IAC. On MR imaging, menigiomas will show a broad dural-base with an associated dural tail. Also, a CSF-vascular cleft can be seen between the tumor and brain parenchyma.

An epidermoid cyst is a congenital intradural lesion arising from inclusion of ectodermal epithelial elements during neural tube closure and is the third most common CPA mass. The main way to differentiate an epidermoid cyst from vestibular schwannoma, is that it appears as a nonenhancing CPA mass on T1 MRI with contrast, unlike vestibular schwannoma which will enhance. Epidermoids are insinuating masses with scalloped irregular margins that usually engulf cranial nerves (7th & 8th), vessels (AICA, vertebral artery). Other imaging findings on MRI is partial or absent attenuation on FLAIR imaging and diffusion restriction (high signal) DWI. 20% of epidermoids have calcification along the cyst-CPA margin on CT. Epidermoid cysts are also known as primary cholesteatoma or epithelial inclusion cyst.

An arachnoid cyst is an arachnoid or collagen-lined cavity that does not communicate directly with ventricular system or subarachnoid space. They commonly will push on the CPA angle but not enter the IAC. Imaging findings that distinguish it from vestibular schwannoma are lack of contrast enhancement and following CSF signal on all MR sequences. Arachnoid cysts also have an imperceptible cyst wall even with contrast enhanced MR or CT sequences.

Facial nerve schwannoma is a rare benign tumor of schwann cells that invest the peripheral facial nerve and can look exactly like a vestibular schwannoma. The best way to differentiate the two is to look for a labyrinthine segment tail in the facial nerve canal. When lesions are large they can appear as "ice cream on ice cream cone" with comma-shaped "tail."

Vestibular schwannomas (also known as acoustic schwannomas) are benign intracranial extra-axial tumors that arise from Schwann cell sheaths that invest the vestibular or cochlear nerve in cerebellopontine angle-internal auditory canal (CPA-IAC). Acoustic neuromas account for approximately 80% of tumors found within the CPA. The remaining 20% are principally meningiomas. In rare cases, a facial nerve neuroma, vascular tumor, lipoma, or metastatic lesion is found within the cerebellopontine angle.

Acoustic tumors, like other space-occupying lesions, produce symptoms by any of 4 recognizable mechanisms: (1) compression or distortion of the spinal fluid spaces, (2) displacement of the brain stem, (3) compression of vessels producing venous or arterial infarction, or (4) compression and/or attenuation of nerves.

Because the CPA is relatively empty, tumors can continue to grow until they reach 3-4 cm in size before they come in contact with important structures. Growth is often sufficiently slow that the facial nerve can accommodate to the stretching imposed by tumor growth without clinically apparent deterioration of function. Tumors that arise within the IAC may produce relatively early symptomatology in the form of unilateral sensorineural hearing loss or vestibular disturbance by compressing the cochlear nerve, vestibular nerve, or labyrinthine artery against the bony walls of the internal auditory canal.

Gold standard for diagnosis is gadolinium enhanced T2 MRI of the brain and CPA-IAC.
MRI can detect masses as small at 2 mm.
T1WI: lesion will appear as an intermediate signal most commonly; a high signal foci will be present if there is a hemorrhagic lesion (which is rare).
T2WI: lesion will appear as a "filling defect" in high signal CSF of CPA-IAC cistern. Small lesions will appear as ovoid filling defect, where as larger lesions have an "ice cream on cone" shaped filling defect.
T1 C+: Focal, enhancing mass of CPA-IAC cistern.
ther MR findings: 0.5% associated arachnoid cyst.