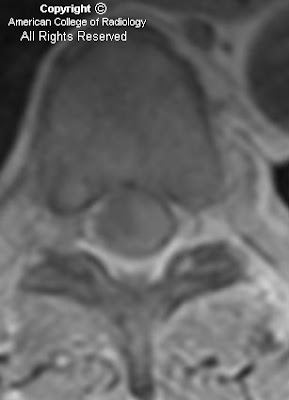 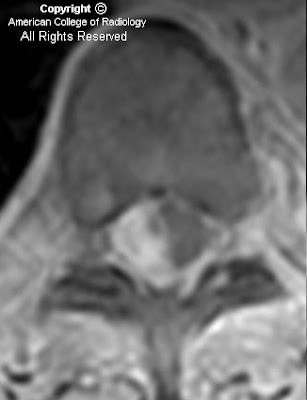 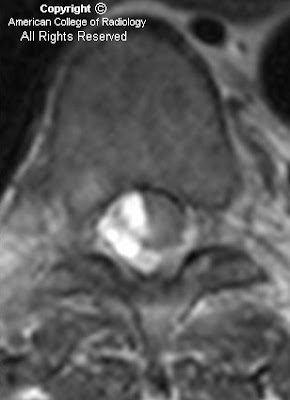 
Nerve sheath tumors and meningiomas are the two most common intradural-extramedullary spinal tumors, representing 30 and 25% of presenting lesions, respectively. Both are typically benign, slow-growing tumors which may be present for years before there is functional impairment. MRI is the modality of choice in distinguishing these pathologies.

Nerve sheath tumors compromise schwannomas and neurofibromas, most often present in the fourth and fifth decades of life, and may be associated with neurofibromatosis. Schwannomas arise from dorsal sensory roots, more commonly in the lower thoracic and lumbar areas. Neurofibromas, unlike schwannomas, involve the parent nerve, and are unencapsulated.

Meningiomas are the second most common intradural-extramedullary spinal tumor and are more common in women. Multiple meningiomas may also be associated with neurofibromatosis. Meningiomas are predominately located in the upper and mid- thoracic areas, different from schwannomas, but are in a similar distribution in the anterior-posterior plane. Both nerve sheath tumors and meningiomas can be found in a “dumbbell shape,” with both extra- and intradural components.

MRI is the modality of choice in the evaluation of intradural-extramedullary spinal tumors. Nerve sheath tumors and meningiomas demonstrate characteristics of craniocaudal location divergence, hyperintensity and heterogeneity of T2W images, intensity and heterogeneity of enhancement, and the presence or absence of the “dural tail sign”. Schwannomas are typically hyperintense and heterogeneous compared to meningiomas on T2W images. The tumors show different contrast enhancement- meningiomas enhance moderately and homogenously, while schwannomas enhance strongly and irregularly. The “dural tail sign,” a reactive thickening of dura tapering away from the tumor, is associated with meningiomas, though this is not a specific sign. Additionally, neural foraminal extension and foraminal widening is suggestive of schwannoma, while bony sclerosis surrounding the mass is suggestive of meningioma.
Vascular tumors may necessitate pre-operative angiography and embolization.
Pubblicato da David Spizzichino a 16:00