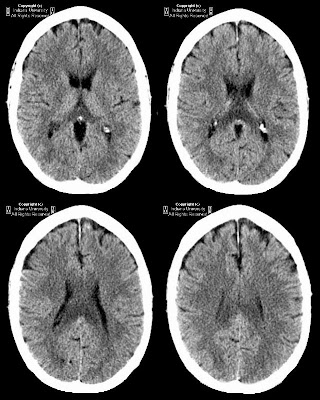 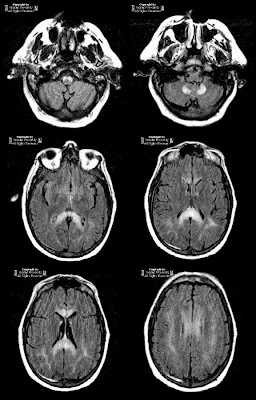 MB is primary degeneration of the corpus callosum. Other white matter tracts may be involved (as in this case).
First described in 1903 by two Italian pathologists, who found necrosis of the corpus callosum on autopsy in 3 alcoholic men that had recently died from seizures.
Initially thought to be caused by excess red wine consumption, now known to be related to vitamin B deficiency, generally seen in alcoholics.
Patients present with confusion, neurocognitive defects, and seizures.
Most patients with acute symptoms go into coma and die.
Chronic symptoms are characterized / accompanied by chronic dementia.
MB typically affects the body of the corpus callosum first, followed by the genu, and finally the splenium. Other white matter tracts may be involved.
On cytopathology, the middle layer of the corpus callosum is most affected.
On MR, disease revealed by areas of low T1 signal and high T2 and FLAIR signal. Signal intensity in the body of the corpus callosum at times extending into the genu and adjacent white matter.
Lesions do not enhance, unlike in glioblastoma, lymphoma, or encephalitis.
On CT, lesions are hypoattenuating.
Pubblicato da David Spizzichino a 16:00