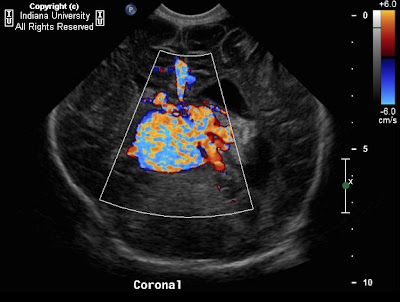 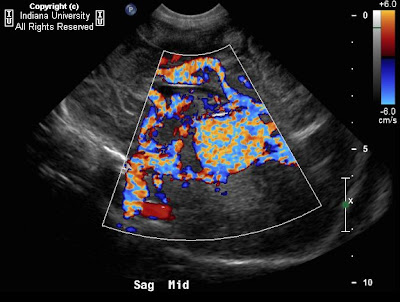 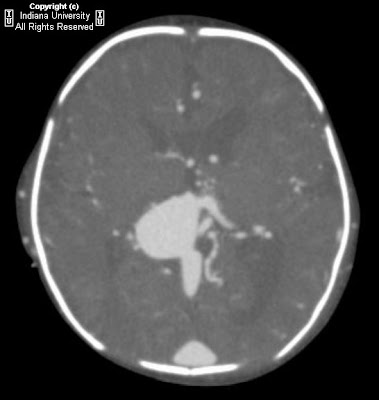 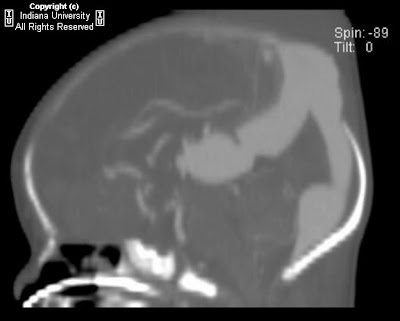 Ultrasound shows that the sulcal pattern is normal. There is no hydrocephalus. There is no hemorrhage. There is a round structure in the midline, anterior to the occipital horns of the lateral ventricles which has color-flow. This measures up to 2.8 cm. There is no extra-axial fluid.
CT shows a large arteriovenous malformation containing numerous large direct fistulous from the bilateral anterior cerebral arteries as well as numerous smaller connections involving choroidal, pericallosal, and thalamoperforator arteries. There is marked dilatation of the vein of Galen measuring approximately 2.2 x 2.0 cm in the axial plane and 2.4 x 2.5 cm in the sagittal plane.

The vein of Galen is located under the cerebral hemispheres and drains the anterior and central regions of the brain into the sinuses of the posterior cerebral fossa. Aneurysmal malformations of the vein of Galen (VGAM) typically result in high-output congestive heart failure or may present with developmental delay, hydrocephalus, and seizures.
VGAM results from an aneurysmal malformation with an arteriovenous shunting of blood. The congenital malformation develops during weeks 6-11 of fetal development as a persistent embryonic prosencephalic vein of Markowski; thus, VGAM is actually a misnomer. The vein of Markowski actually drains into the vein of Galen.
Associated findings include cerebral ischemic changes such as strokes or steal phenomena that result in progressive hemiparesis. Hemorrhage from the malformation can occur, although this is not a common finding. Finally, the malformation may result in mass effects, causing progressive neurological impairment. Alternatively, the malformation may cause obstruction of the cerebrospinal fluid (CSF) outflow and result in hydrocephalus.
Pubblicato da David Spizzichino a 16:00