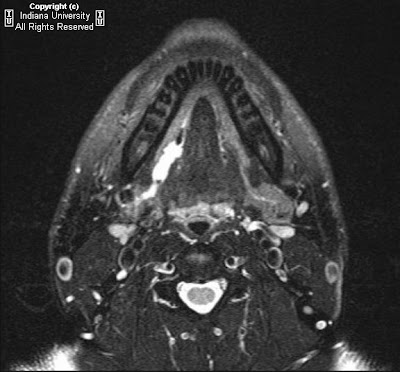 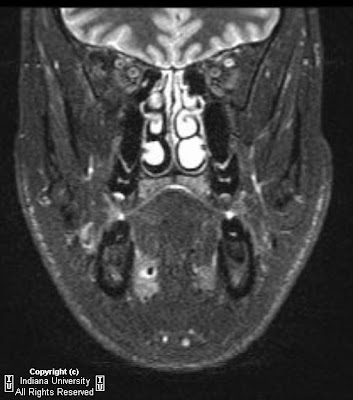 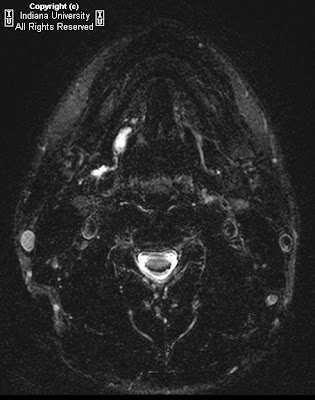 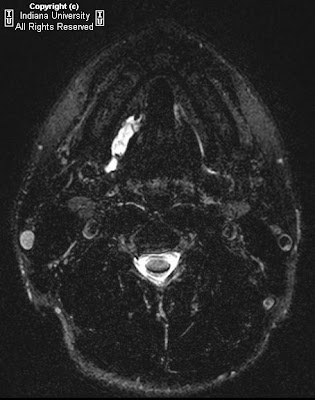 The submandibular gland is the second largest in the mouth. It has relatively viscous secretions, which can predispose to the formation of duct stones.
The submandibular gland has a superficial portion, which is superficial and inferior. The deep portion is deep to the mylohyoid muscles and superior to the superficial lobe. Wharton's duct arises from the deep portion of the gland.
Conventional sialography, with contrast injection of Wharton's duct under fluoroscopy, is a limited evaluation of the duct and the gland, if, as in this case, there is complete obstruction of the distal duct by a stone or stricture. Conventional sialography requires cannulation of the duct, which could be technically difficult. While CT is the best imaging modality to identify sialolithiasis, MR sialography gives the best evaluation of the gland. Sumi et al. established that MR sialography has good correlation between CT imaging findings and clinical findings.
Acute sialadenitis can be bacterial or viral. Purulent material can be milked from the duct. Complications can include formation of a fistula to the skin, an abscess or trismus, if the parapharyngeal space is involved. Also, rarely, Ludwig angina, with involvement of the submental and sublingual space, can occur.
Chronic sialadenitis presents with persistent colicky pain with eating. It is not as painful as acute sialadenitis. This is often associated with sialolithiasis.
Sialolithiasis is usually associated with the submandibular gland (70%). The stones are calcium phosphate or calcium carbonate. Formation may be related to calcium salt precipitation, epithelial duct injury or dehydration. Surgical excision is usually needed.
Autoimmune sialadenitis is usually associated with Sjögren's syndrome. MR findings include T2 prolongation of the parotid glands consistent with diffuse parenchymal destruction.
Pubblicato da David Spizzichino a 16:00