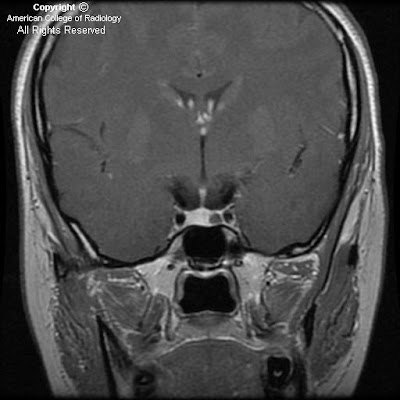 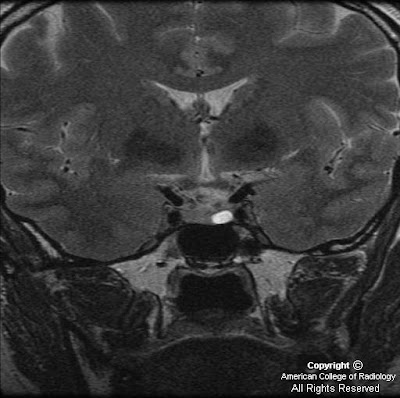 Figure 1: Contrast enhanced T1 weighted image of the sella demonstrate normal enhancement of the pituitary gland with a small round hypoenhancing focus consistent with microadenoma which fills in on later sequences.
Figure 2: Coronal thin section T2 weighted image demonstrates a bright focus on the left side of the pituitary gland, in the region of previously noted hypoenhancement, consistent with a microadenoma.

The typical presentation of prolactinoma is a young female with primary or secondary amenorrhea and infertility, with associated galactorrhea. Though usually seen in females, prolactinomas can occur in males with delayed puberty or primary hypogonadism. Growth hormone secreting adenomas, another type of pituitary microadenoma, present with acromegaly in adults and gigantism in adolescents. Prolactinomas typically occur in the 25-30 year age group, while growth hormone-secreting adenomas occur between 30-50 years of age.

Pituitary microadenoma is an intrapituitary lesion surrounded by cresecentic rim of compressed anterior pituitary. Though predominately located within the sella turcica they rarely can have an ectopic origin within the sphenoid or cavernous sinus, pituitary stalk, or third ventricle. By definition, microadenomas are less than 10 mm in diameter. The differential for pituitary microadenoma includes non-neoplastic cysts, such as Rathke cleft cyst and pars intermedia cyst; craniopharyngioma; and pituitary hyperplasia.

Conservative treatment is recommended for “incidentalomas,” including clinical and imaging follow-up, unless there is a change in size in which case ophthalmological and endocrinological evaluation is recommended. For functioning microadenomas, medical therapy, such as bromocriptine and dopamine agonists, i.e. cabergoline, may reduce prolactin secretion to normal in 80% of cases. Surgical treatment is curative in 60-90% of cases.
Pubblicato da David Spizzichino a 16:00