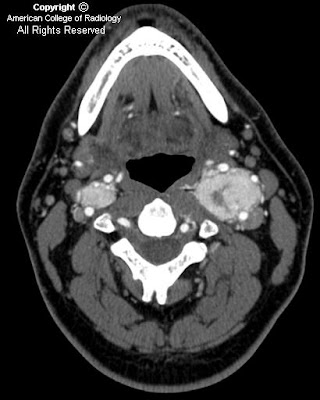 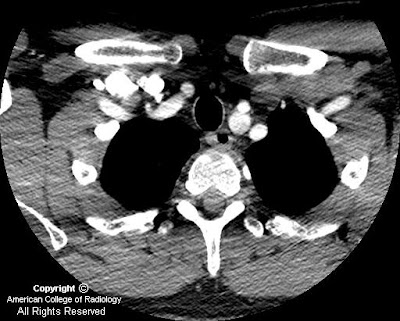 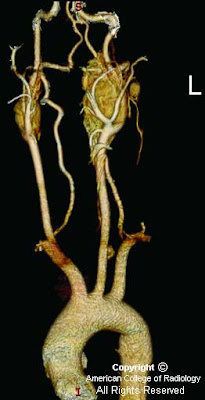 
Carotid body tumors, also known as chemodectomas or paragangliomas, are benign, slow growing neoplasms, so named because they arise from glomus cells at the carotid junctions. They have overall good prognosis, but a propensity for local invasion. They follow the rule of tens: 10% are bilateral, 10% malignant, 10% familial, and 10% multicentric (although in cases with genetic predisposition 32%-78% are multi-centric). Hereditary phenotypes typically occur earlier than sporadic ones, during the second and third decade of life, and have been associated with tumor syndromes including: MEN II, von Hippel-Lindau disease, and neurofibromatosis type I.

Somatostatin receptor scintigraphy (SRS) assists diagnosis of carotid body tumors by confirming overexpression of somatostatin receptors and screens the entire body for metastatic disease with excellent image quality. Although other head and neck tumors may also overexpress somatostatin receptors (such as lymphoma, medullary and differentiated thyroid cancers) these are usually less avid. The hypervascular nature of these masses and their proximity to the carotid junctions can be ascertained with neck CT angiography or ultrasound. Schwannomas should be included in the differential diagnosis however they are usually not octreotide-avid.

Several authors have reported that SRS has a superior sensitivity compared to MIBG imaging for detection of head and neck paragangliomas. For example, Muros and colleagues, in a group of 8 patients with head and neck paragangliomas, found MIBG imaging detected only 50% of tumors compared to 100% sensitivity with octreotide scintigraphy. MIBG remains a sensitive modality for evaluation of paragangliomas elsewhere in the body. Tissue confirmation of carotid body tumors is generally avoided due to high risk of bleeding and cranial nerve damage, which are also the complications of surgical resection. Therefore imaging modalities play an important role in the diagnosis and surgical planning for carotid body tumors.
Pubblicato da David Spizzichino a 16:00