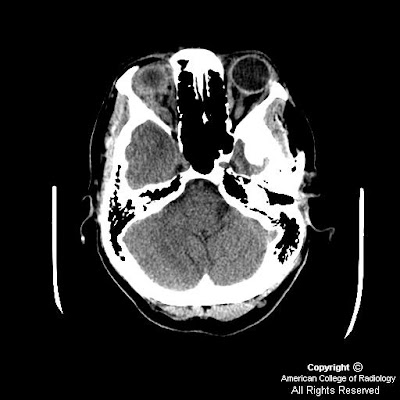 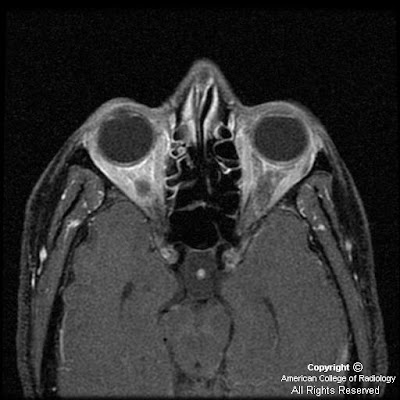 Figure 1: In the right orbit region there is a retroglobar soft tissue mass with no associated proptosis. Retraction of the globe is appreciated.
Figure 2: Axial T1 post contrast with fat saturation. There is heterogeneously enhancing infiltrative appearance to the bilateral retrobulbar compartments, right greater than left. There is also associated infiltration and fullness of the orbital fat.


Orbital metastasis is a significant cause of orbital disease in adults and accounts for 3-10% of all orbital tumors. While embryonal tumors, neuroblastomas, Ewing’s sarcomas and Wilms tumors are responsible for most pediatric metastatic orbital tumors, orbital metastases in the adult population are predominantly from breast, lung, and prostate carcinomas. In the female population, the most common primary tumor metastasizing to the orbit is adenocarcinoma of the breast. While only 8% of breast cancers demonstrate symptomatic metastatic disease at initial presentation, 12-31% of cases exhibit orbital metastases as the earliest indication of metastatic spread. Furthermore, when orbital metastases are detected they are frequently associated with pervasive metastatic disease.

Orbital metastatic lesions typically present in the 7th decade of life. They tend to arise in the choroid, retrobulbar soft tissues and bony orbit. While it is uncommon for orbital metastases to present bilaterally, breast carcinoma is the most likely malignancy to be associated with bilateral orbital metastases. Clinically, orbital metastases demonstrate acute proptosis, external opthalmoplegia, visual deficits, diplopia, scotomata, and orbital pain. Additionally, scirrhous adenocarcinoma of the breast often presents with enopthalmos, which has been hypothesized to result from the orbital fibrosis generated by the tumor.

Radiologic imaging of orbital metastases of scirrhous carcinoma of the breast typically demonstrates diffusely infiltrating retrobulbar masses with ill-defined margins. On CT, metastases to the choroid or retina are typically seen in the posterior globe with frequent expansion into the retrobulbar space. These metastases also have the potential to cause secondary retinal detachment and hemorrhage. Metastases to the extraocular muscles, optic nerve, or lacrimal gland are associated with an increase in the structure’s size, irregular borders and slight contrast enhancement. Additionally, MR imaging may also be used to evaluate orbital metastatic lesions. An added benefit associated with MRI is the ability to simultaneously detect concurrent silent brain lesions, which are not infrequently found along with orbital breast metastases.

Fine-needle aspiration biopsy is often utilized to confirm the diagnosis of orbital metastases. In the case of metastatic scirrhous carcinoma of the breast such biopsies tend to be more challenging as a result of the fibrous stroma that characteristically encases these malignancies. Treatment of orbital metastases is primarily local radiotherapy; however, chemotherapy is often required with systemic disease. Following the discovery of distant metastases, there is a 2 year survival associated with metastatic breast cancer.
Pubblicato da David Spizzichino a 16:00