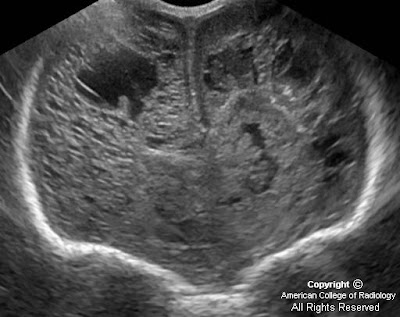 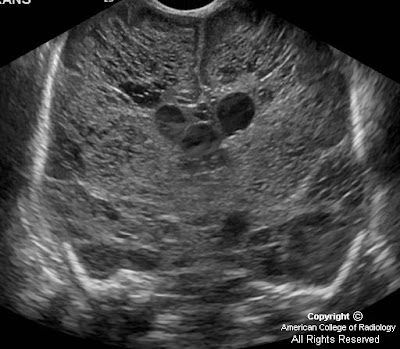 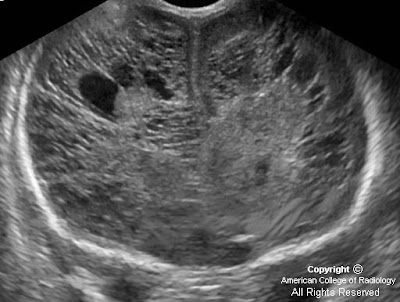 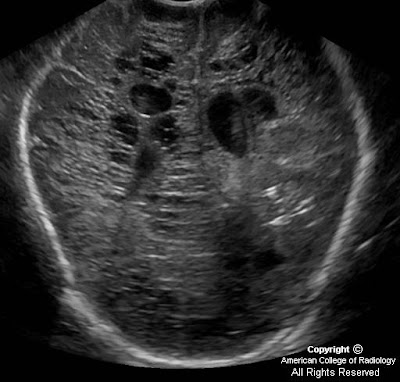 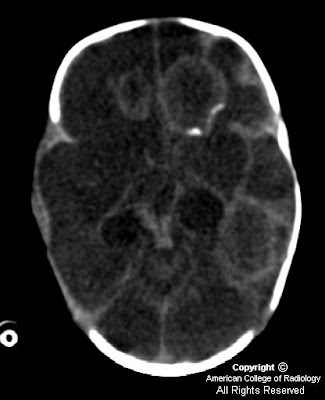 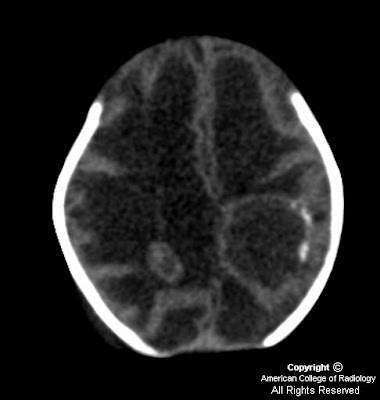 
Group B beta-hemolytic streptococci and E coli are the most common causes of meningoencephalitis in the neonatal period. Serratia marcescens, or Citrobacter, may be considered as a causal micro-organism in cases of hemorrhagic meningoencephalitis. It is important to note that Bacillus cereus, though rare, can also cause hemorrhagic meningoencephalitis which is most often fatal. B cereus is a gram-positive, aerobic, spore-forming rod which is ubiquitous in the environment. The presence of this organism in blood or CSF is often regarded as a contaminant of specimens received by the microbiology laboratory and is therefore often disregarded by clinicians and microbiologists.

Acquisition of an infection by Bacillus cereus is thought to be nosocomial and is linked to the use of central or peripheral catheters, contaminated dressings, hospital linens, and ventilator equipment. Premature infants in ICU units are most vulnerable to this infection. Vasculitis, vasospasm, hydrocephalus, and diminished cerebrovascular autoregulation phenomena which are often seen in premature infants, are some of the risk factors for the infection.

Bacillus cereus is known to swarm out of the veins and cause extensive tissue damage and liquefactive necrosis by producing toxins, which include a necrotising enterotoxin, phospholipases, proteases, and haemolysins. In the brain, the destruction initially involves the subcortical and periventricular white matter extensively, sparing the cortex. The cortex can become involved in later stages and when this occurs, it preferentially involves the occipital lobes. Involvement of the basal ganglia is rare and can occur as a part of extensive brain destruction.

Brain sonograms obtained in the first 2-3 days can be normal but days later show asymmetrical white matter hyperechogenicity due to widespread destruction. This is later followed by development of multiple cysts, often with rims of hyperechogenicity around them. Multiple areas of parenchymal or intraventricular hemorrhage may also be demonstrated on ultrasound. Sometimes, brain sonography shows intraventricular septa and thickened ependyma due to ventriculitis. CT features include diffuse hypodensity of the white matter with multiple areas of hemorrhage and abscesses. The abscesses may undergo cavitatory necrosis and calcification. On MRI, multiple, confluent white matter hyperintensities are seen on T1W images and hypointensities on T2W images, both consistent with hemorrhagic destruction. DWI show restricted diffusion in the brain parenchyma due to cytotoxic edema and may also show lesions that were not detected on conventional MR images. The rate at which the findings develop sequentially in cases of suspected Bacillus cereus meningoencephalitis can be rapid and hence it’s worthwhile to consider serial sonography.

PVL: PVL is an ongoing process which in many cases starts with symmetrical flaring in the periventricular white matter within the first days of life sometimes evolving into cystic destruction of the white matter. The condition is bilateral and almost always symmetrical, preferentially damaging posterior frontal and parietal regions. This can be confused with B cereus meningoencephalitis in the premature neonate. B cereus meningoencephalitis shows a dramatic change on serial sonograms performed whereas in PVL, the rate of evolution of the cystic changes is much slower. The presence of multiple abscesses in meningoencephalitis and the detection of the causative organism in the CSF may help differentiate the two conditions.

Asphyxia: shows transition from abnormal hyperechogenicity in major arterial areas to slow (in the course of a few weeks) destruction. This is in contrast to very rapid destruction of an initially normal brain in cases of bacterial encephalitis.

Herpes simplex viral encephalitis: The cortex and deep gray nuclei may also be affected, because of infarction caused by vasculitis and obstruction of small vessels, as well as neuronal apoptosis.