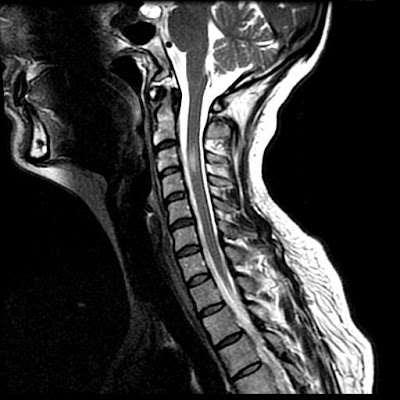 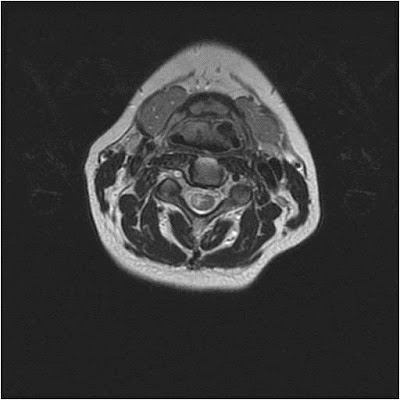 Figure 1: Sagittal T2-weighted image demonstrates an elliptical focus of high signal in the spinal cord from the mid C3 to the upper C4 vertebral body level. There is slight cord expansion.
Figure 2: Axial T2-weighted image at the C3 level demonstrates high signal in the right side of the spinal cord. There is slight extension of the abnormal signal across midline. Note the absence of the normal flow void in the right vertebral artery.
Figure 3: Aortic arch angiogram demonstrates no filling of the right vertebral artery consistent with occlusion.


Most spinal cord infarctions involve the anterior two thirds of the spinal cord in an anterior spinal artery distribution. As both anterior horns are affected, patients typically present with bilateral extremity weakness and dissociated sensory deficits secondary to the involvement of cortical spinal and spinal thalamic tracts. Vibration and proprioception testing are normal as there is sparing of the posterior columns. In acute cases, MRI imaging demonstrate swelling of the cord with high T2-weighted signal intensity in the central aspect of the cord which creates the "owl's eye" appearance on the axial images due to involvement of the central gray matter.

A second, rarer cord ischemia syndrome is cord infarct due to occlusion of the posterior spinal artery. Patients present with deficits in vibration and proprioception testing as well as ataxia. Except for elevation in protein, CSF analysis is usually normal in all types of spinal cord infarction.

The rarest form of cord infarction involves only a unilateral sulcal artery. Unlike anterior spinal artery infarcts, where both anterior hemicords are involved, in unilateral sulcal artery infarctions only one-half of the anterior spinal cord is involved. Thus patients present with an acute Brown-Séquard-like syndrome without vibratory sensation or proprioception as the posterior columns are not involved. This type of lesion appears to involve only the upper cervical spinal cord. This may be due to the better vascular and possible collateral supply of the cervical cord than then thoracic spinal cord.

On axial imaging there is a unilateral central cord lesion with a linear extension to the contralateral central cord suggesting involvement of the crossing spinothalamic pathways. Contrary to the common belief that patients with spinal cord infarction have a poor prognosis, all patients with such sulcal artery infarction improve quickly and significantly with minimal or no deficits at the follow-up, most likely owing to the rapid development of collateral flow from other branches of the anterior or the posterior spinal artery. It is worth pointing out that dissection might not be the only mechanism to explain such a syndrome as similar sulcal artery syndromes have also been reported due to other etiology such as atherosclerosis or aortic emboli.

Review of the literature identified a few additional reported cases of sulcal artery territory infarction although other forms of spinal cord infarct following vertebral artery dissection are more common. All the patients with sulcal artery territory infarction had involvement of the upper cervical spinal cord. All had unilateral Brown-Séquard-like presentations with ipsilateral arm and leg weakness, contralateral sensory loss to temperature or hyperalgesia, and minimal or no loss of vibratory sensation and proprioception. All patients had significant improvement at short-term follow up with minimal or no neurological deficits. Spinal fluid examination was normal in two of the four patients tested. Three of the four patients had MRI and all showed a pencil like appearance on the sagittal plane. On axial image, two patients had a characteristic hemi-central cord lesion with anterior extension to the contralateral central counterpart.
Pubblicato da David Spizzichino a 16:00