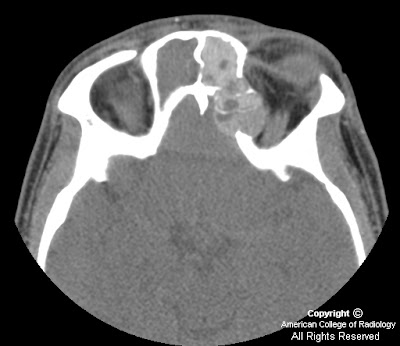 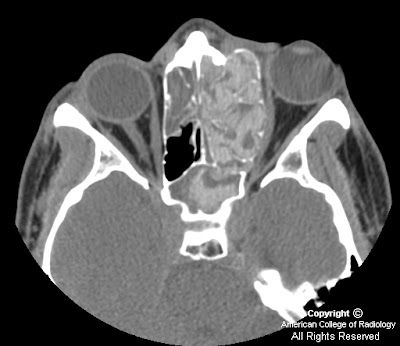 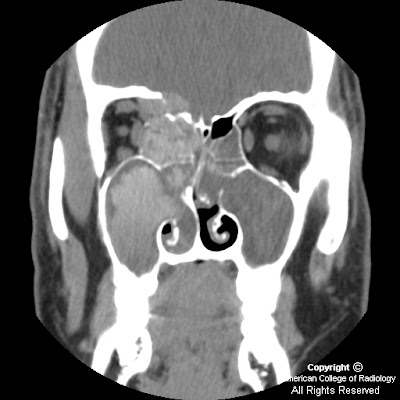 
Allergic fungal sinusitis (AFS) is believed to be an allergic reaction to aerosolized environmental fungi in an immunocompetent host. This process is quite different than that of the invasive fungal infections seen in immunocompromised patients, such as those with diabetes mellitus or AIDS. The pathologic process may be a Type 1, IgE-mediated hypersensitivity reaction to the presence of fungus. Additional factors such as anatomy, genetics, and possible lymphocyte sensitization may also be involved. Most patients have a history of allergic rhinitis, but timing of the development of the process is varied. Thick fungal debris and mucin develop within the sinuses and must be excised in order to remove the inciting allergen.

AFS usually involves multiple sinuses and can be unilateral or bilateral. The ethmoid sinus is the most common location, followed by the maxillary, frontal, and sphenoid sinuses. Expansion and even erosion of the sinuses is characteristic. In fact, there is approximately a 20% rate of erosion with extension into adjacent cavities. Sites of extension include the nasopharynx and pterygomaxillary space, as well as the intracranial and intraorbital regions. The sinuses are usually opacified by centrally hyperdense material and a peripheral rim of hypodense mucosa. Hypointensity on T1-weighted imaging and T2-weighted imaging is the most common finding on MRI. The peripheral mucosa demonstrates enhancement on contrasted images.

AFS is usually treated by local excision and steroid therapy. Antifungal therapy is also attempted in some cases, but results of this therapy are equivocal. Recurrence after surgery is not uncommon; however, the inclusion of steroid therapy significantly reduces recidivism.
Pubblicato da David Spizzichino a 16:00