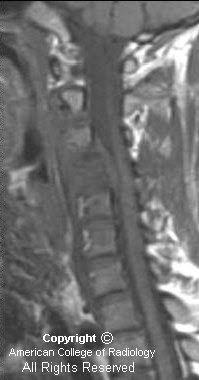 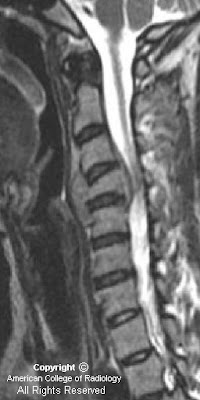 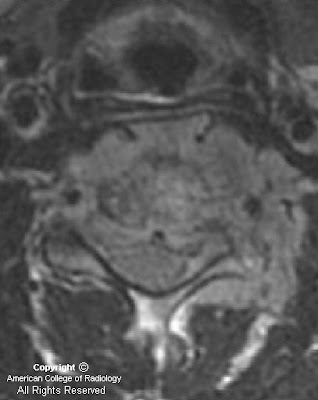 Sagittal T1 image (Figure 1) in a patient with Hodgkin's lymphoma. Compression deformity of the C4 vertebral body is noted and there is abnormal marrow signal. There is an associated mass with epidural extension of tumor that directly impinges on the cord, displacing intervening CSF.

Two sagittal T2 images (Figure 2 and Figure 3) in a patient with Hodgkin's lymphoma show compression deformity of the C4 vertebral body (Figure 2). There is an associated mass with epidural extension of tumor that directly impinges on the cord with additional tumor seen anterior to the vertebral body. Displacement of the intervening CSF is better demonstrated on this T2-weighted sequence (Figure 3).

Axial T2 image (Figure 4) at the affected level confirms that the anterior aspect of the cervical canal is flattened by the tumor with loss of intervening CSF and deformity of the cord. These findings are indicative of cord compression.

Many types of tumor metastasize to the epidural space. Relative incidence of spinal cord compression by a particular type of tumor is determined by a combination of tumor prevalence in the population and its predilection for spinal involvement. The most common tumors causing cord compression in adults are prostate, breast, lung, NHL, multiple myeloma, renal, and colorectal cancer. The most common types in children are germ cell tumors, Hodgkin's, and sarcomas, especially Ewing’s.

Magnetic resonance imaging is the study of choice in the evaluation of suspected cord compression as it is noninvasive, does not involve radiation, and provides for investigation of both osseous and soft tissue lesions. Whole spine imaging is generally undesirable as it is more time-consuming, expensive, and difficult for patients who are often in considerable pain. It further lowers resolution on exams that are often suboptimal secondary to severe patient pain and patient movement.

Therefore, information from the neurological exam is critical for localization of the lesion and optimization of the imaging protocol. Spinal sensory levels on neurological examination may be up to several segments below the anatomic level of cord compression. Evaluation of motor function and reflexes is very useful for lesion localization. Pain is ubiquitous in cancer patients, and while it may be initially localized, it is not specific to cord compression and is more often related to vertebral metastasis and pathologic fracture. Pain increases in intensity with worsening compression. Pain from cord compression often worsens with recumbency.

Once the site of interest is more precisely identified, sagittal T1 and T2 images and axial T2 images are required for the diagnosis. Spinal cord compression may be defined on imaging as the presence of a mass lesion abutting the cord with the complete loss of intervening CSF. This must be accompanied by deformation of the spinal cord or the presence of signal changes within the cord. The findings are best visualized on T2-weighted images. If the patient is concurrently symptomatic, acute intervention is mandated with the specific type of intervention determined by the underlying disease process.
Pubblicato da David Spizzichino a 16:00