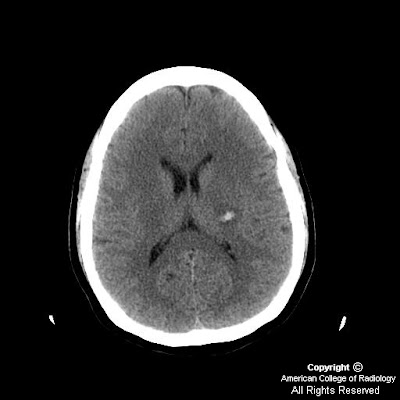 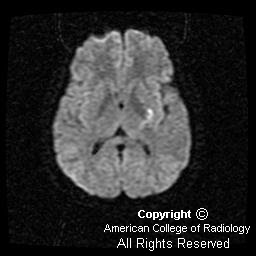 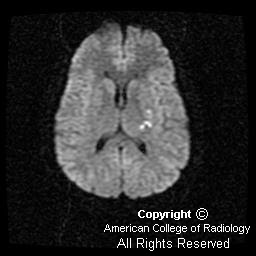 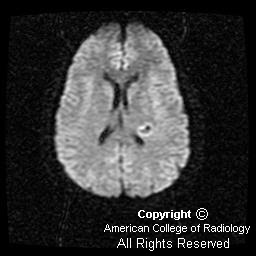 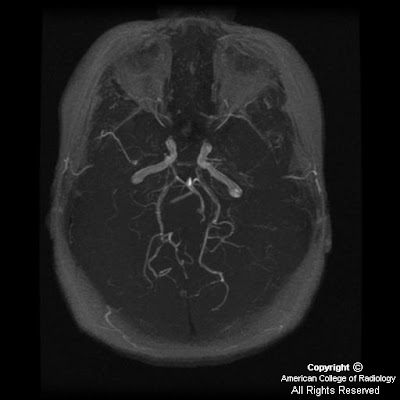 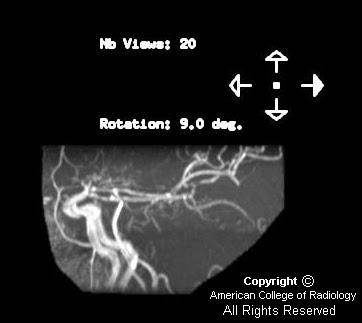 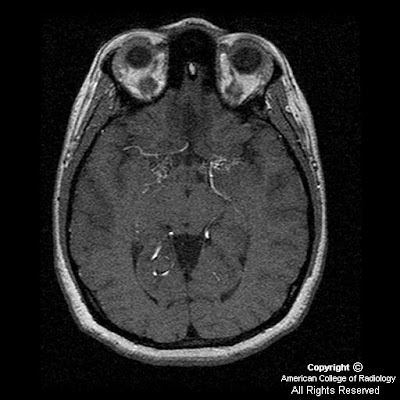 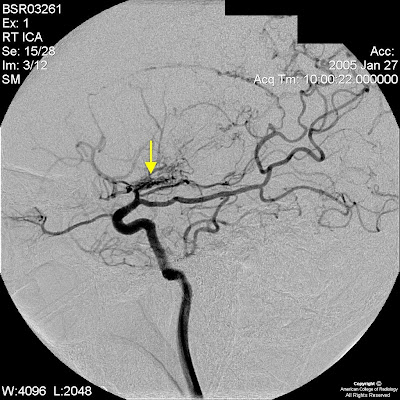 There is an area of increased attenuation with surrounding edema in the posterior limb of the left internal capsule, extending into the corona radiata. This represents acute hemorrhage.
Diffusion-weighted imaging demonstrates the magnetic susceptibility of the acute hemorrhage (Figure 4). However, inferior to the hemorrhage are areas of increased signal distinct from the hemorrhage, suggesting associated infarction (Figure 2 and Figure 3).
MIP image from the Circle of Willis study demonstrates bilateral supraclinoid carotid artery occlusion (Figure 5) There is no flow in the anterior cerebral artery territory, minimal flow in the middle cerebral artery territory, and hypertrophy of the posterior circulation (Figure 5).
IVI image of the 3D TOF Circle of Willis study again demonstrates the presence of bilateral supraclinoid carotid artery occlusion (Figure 6).
A single source image from the Circle of Willis MRA demonstrates the classic hypertrophy of the lenticulostriate arteries seen in Moya moya (Figure 7).
This single lateral view from catheter angiogram of the right internal carotid artery, performed for evaluation of possible treatment options, better demonstrates the classic finding of the "puff of smoke," caused by the hypertrophied lenticulostriate vessels (Figure 8).


Translated literally as “hazy puff of smoke” in Japanese, Moya moya is a chronic cerebrovascular occlusive disease involving the Circle of Willis. The pathologic findings of Moya moya include intimal thickening and internal elastic lamina disruption of the arteries of the Circle of Willis and collateral vessels. The angiographic features of the disease include bilateral stenosis or occlusion of the supraclinoid portion of the internal carotid artery that extends to the proximal portions of the anterior cerebral artery and middle cerebral artery, as well as the presence of parenchymal, leptomeningeal, or transdural collateral vessels that supply the ischemic brain. These collateral vessels are typified by a meshwork appearance. Aneurysm formation is quite common, most often affecting the anterior communicating and anterior cerebral arteries with unilateral Moya moya, and basilar artery with bilateral Moya moya. Extracranial involvement of Moya moya has been described in the literature, most frequently involving the renal arteries.

Cerebral angiography is still the gold standard for diagnosis of Moya moya, and it is using this modality that we can best visualize the appearance of these collateral vessels as a “puff of smoke.” CT is useful for diagnosing acute hemorrhage or prior infarct. MR imaging has also been widely used in assessing anatomic detail and the vascular architecture. MR often demonstrates loss of distal internal carotid artery flow void, as well as small punctate hypointense lesions on T1-weighted imaging in the basal ganglia. These punctate hypointense lesions are the collateral vessels that form due to the occlusion of larger vessels, such as the Circle of Willis.

Moya moya commonly afflicts people of Japanese and Asian decent, but has been diagnosed in people of different races and ethnicities. It has a slight predilection for females (1.8:1) and affects both children and adults. There is increased mortality in adults compared to children (10%:4.3 % respectively); and in greater than 50% of all patients, the disease results in progressive deterioration of cognitive function. The etiology of Moya moya is unknown, but associations with conditions such as sickle cell disease, neurofibromatosis, Down’s syndrome, and tuberculosis have been documented in the literature.

The clinical features of Moya moya can be divided by age group (adult and pediatric) or presenting symptom (epilepsy, ischemic events, or hemorrhagic stoke). Epilepsy and ischemic events are more common in children, whereas intracerebral hemorrhage is far more common in adults. Hemorrhage is most common in the thalamus, basal ganglia, and frontal lobe tissue adjacent to the frontal horn of the lateral ventricles. Treatment of acute Moya moya is usually symptomatic, and often involves surgery. Options include direct and indirect revascularization. Medical treatment is given as the presenting symptoms dictate.