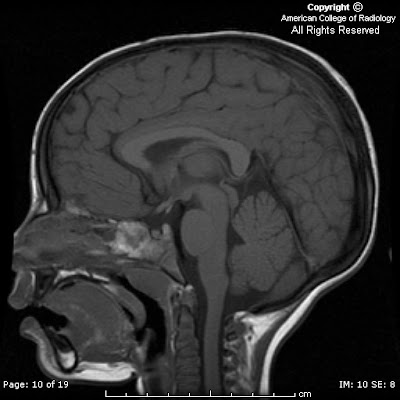 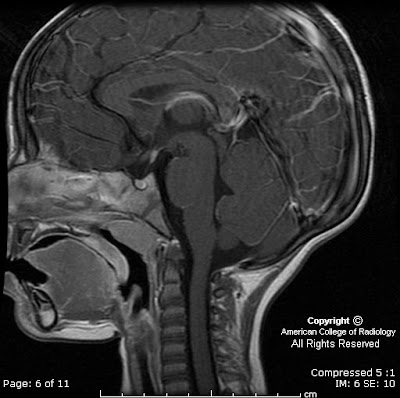 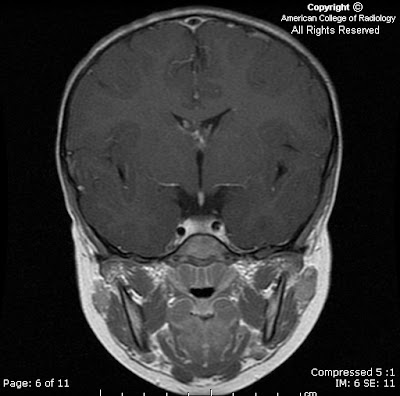 
Posterior pituitary ectopia is a developmental disorder of the porencephalon, thought to be genetic in origin. Multiple genes have been implicated. The end result is defective neuronal migration. Patients often have other midline abnormalities, such as septooptic dysplasia and lobar holoprosencephaly. Other structures developing at the same time may be affected. The optic/olfactory nerves and the anterior pituitary should be carefully evaluated, as they may be abnormal or absent. Additional associated syndromes include: Kallmann sydrome, CHARGE syndrome, and Pallister-Hall syndrome. Patients are imaged because of other abnormalities, hypopituitarism, and short stature. The anterior pituitary may be affected by absence or hypoplasia of the infundibulum.

Cranial computed tomography may reveal the pituitary fossa to be small. On MRI, the posterior pituitary bright spot (bright secondary to the accumulation of ADH-neurophysin) is ectopic and often seen just below the tuber cinereum. The ectopic pituitary is hyperintense on T1-weighted imaging. The adenohypophysis is small. On either CTA, conventional angiography, or MRA the supraclinoid carotid arteries approach the midline and appear to be “kissing.” The frontal lobes may be abnormal.
Pubblicato da David Spizzichino a 16:00