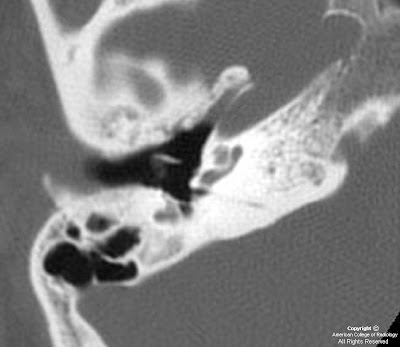 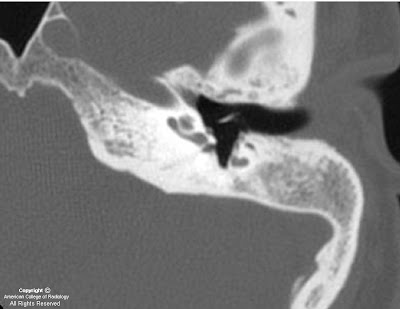 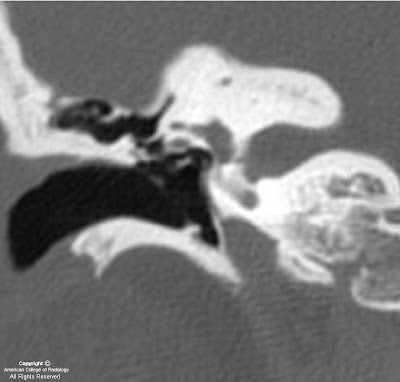 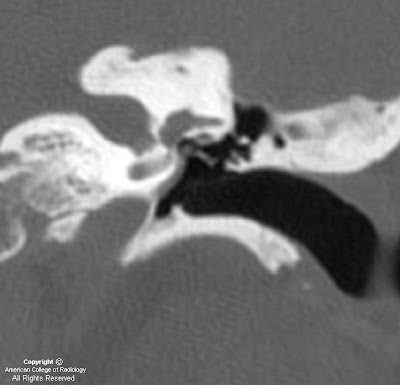 Figure 1 and Figure 2: Axial images of temporal bone show presence of bilateral persistent stapedial artery (PSA) coursing over the cochlear promontory.
Coronal image of temporal bone shows the origin of the PSA from the petrous part of the carotid artery and coursing superiorly along the cochlear promontory. Tympanic portion of the facial nerve is also seen.


PSA is a rare congenital vascular anomaly of the middle-ear. It is usually asymptomatic and an incidental finding at surgery, or presents with pulsatile tinnitus or conductive hearing loss. The PSA arises from the petrous part of the internal carotid artery, enters the anteromedial hypotympanum, and is contained in the Jacobson canal. After leaving the osseous canal, it crosses the cochlear promontory and passes through the obturator foramen of the stapes. It then enters the fallopian canal through a dehiscence just behind the cochleariform process and travels anteriorly in the anterior facial canal. This leads to prominence of the tympanic part of the facial nerve; an indirect imaging sign of PSA. Finally, the PSA exits just before the geniculate ganglion, entering into the extradural space of the middle-cranial fossa. Another indirect sign of PSA is absent or hypoplastic foramen spinosum, though the foramen spinosum can be congenitally absent in 3.2 % of the population; hence, other imaging signs of PSA need to be present to confirm its presence.