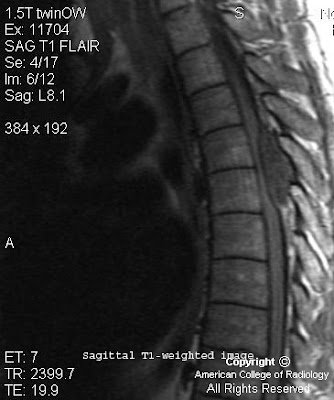 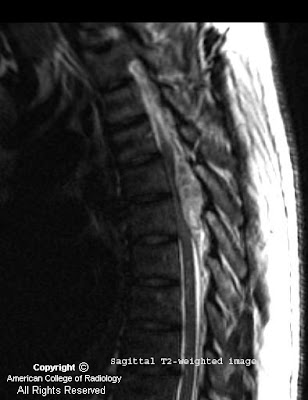 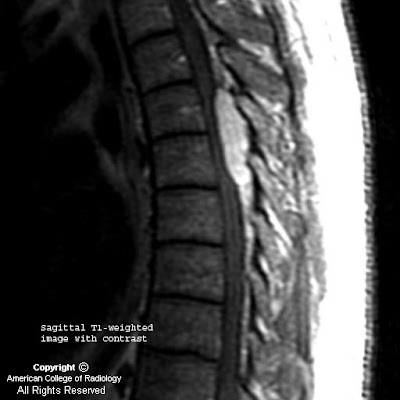 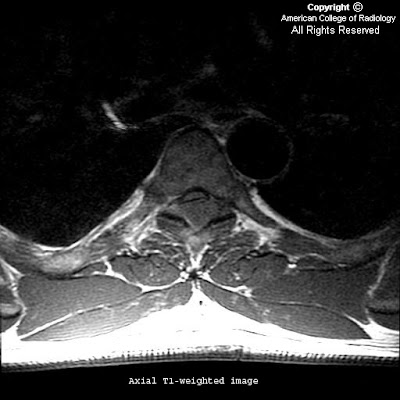 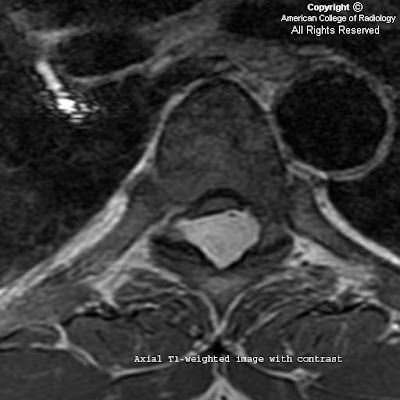 
Purely epidural hemangiomas account for up to 12% of all spinal hemangiomas, the large majority of which are located in the vertebral bodies, with occasional epidural extension. When purely epidural hemangiomas occur, they tend to develop in the thoracic spine, less often in the lumbosacral spine, and only rarely in the cervical spine. Extension to the paravertebral space with neural foraminal widening and adjacent bony erosion is common. The lesion is generally located in the posterior spinal canal, and frequently partially encircles the spinal cord. They are usually solitary lesions, but may be associated with hemangiomas in other parts of the body, including cutaneous vascular lesions.

Symptoms tend to be gradual in onset, and include back pain, leg weakness, ataxia, parasthesias, and eventually paraparesis. Symptoms may be brought on acutely, most often secondary to trauma. Microhemorrhage in the lesion, which may occur with even minor trauma, can cause an increase in mass effect of the lesion with sudden worsening of, or acute onset of symptoms. Exercise, systemic infection, pregnancy, rapid change in posture, or straining can also cause acute onset of symptoms.

The differential diagnosis for capillary or cavernous epidural hemangioma includes lymphoma, meningioma, neurogenic tumors, epidural hematoma, epidural abscess, metastatic disease, and extramedullary hematopoiesis. Epidural hemangiomas tend to have very consistent imaging characteristics, and are generally isointense to the spinal cord on T1-weighted images, hyperintense on T2-weighted images, and demonstrate intense, homogeneous enhancement after administration of contrast. This specific constellation of imaging characteristics may help distinguish an epidural hemangioma from the other lesions in the differential diagnosis. In addition, a thin rim of low-signal intensity is often visible surrounding the lesion on both T1- and T2-weighted images, which often helps establish the lesion to be truly epidural, rather than extramedullary but intradural.

Treatment involves surgical resection, and complete resection often results in complete neurologic recovery. However, intraoperative bleeding (due to the vascular nature of the tumor) or intrathoracic extension may prevent complete excision.
Pubblicato da David Spizzichino a 16:00