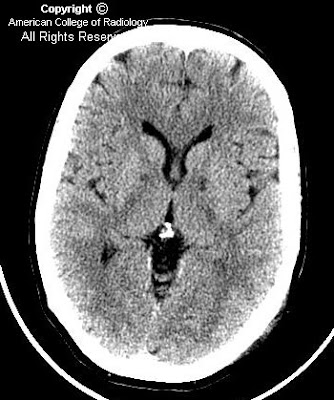 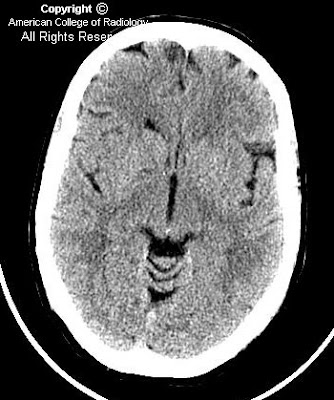 NECT images show low density in the bilateral globus pallidi. The remainder of the basal ganglia and hemispheric white matter is unremarkable.


Bilateral GP low density on NECT is virtually pathognomonic of CO poisoning.
MRI is more accurate and should be used for follow-up.
Normal CT on arrival correlates with better prognosis.

Carbon monoxide poisoning remains an important cause of morbidity/mortality in the US despite improvements in automobile and home safety. While nearly 50% are due to suicide and many are associated with fires, a large number of unintentional CO poisonings still occur. Race and source of CO are also important, as CO poisoning in Caucasians is more likely to be suicidal and fatal than in African- or Asian-Americans. Also, toxicity from automobile exhaust is more likely to be fatal, and malfunctioning heating equipment is a more common source.

Patient clinical history may include unresponsiveness, seizure, or adjunctive information such as multiple patients from the same household. Nausea, vomiting and headache are more general symptoms which are often associated with a lower degree of toxicity.

For most patients the initial imaging study is a NECT following ER evaluation. Hypodensity in the bilateral GP is a strong indicator for this process and is virtually pathognomonic. CT findings are also indicative of outcome. A patient with a normal head CT is very unlikely to have long-term neurological abnormalities.

MRI is much more accurate than CT in defining the extent of disease (e.g. white matter ischemic changes, internal capsule or caudate nucleus involvement). As such, this is the preferred modality for follow-up. Findings include T1 hypointensity (necrosis) or hyperintensity (hemorrhage), T2 and FLAIR hyperintensity, hypointense rim on T2 (hemosiderin deposition), and DWI hyperintensity in the acute setting.
Pubblicato da David Spizzichino a 16:00