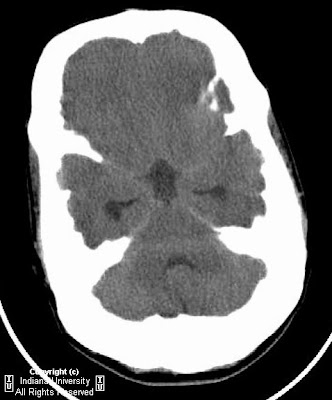 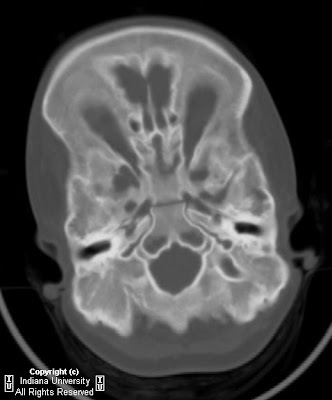 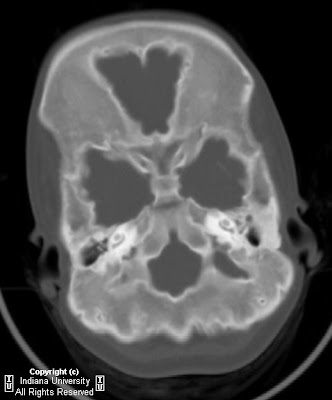 Marked thickening of the skull base with narrowing of all the neural foramina. Hydrocephalus.

Craniometaphyseal dysplasia is a rare genetic disorder whereby stromal cells are not able to differentiate osteoclast precursors, resulting in craniofacial and long bone abnormalities and cranial nerve palsies.
Autosomal dominant form has variable expression. Autosomal recessive is more severe.
Radiologic findings include hyperostosis of the skull base, narrowing of the neural foramina which exit the skull base, and fraying or "celery stalking" of the metaphyses, usually in the lower extremities.
These children have normal growth, normal intelligence, no bone fragility and no growth retardation.

In this particular case:
- This patient has had bilateral cranial nerve VII decompression secondary to bony overgrowth of the neural pathway. This patient also has optic canals which are 50% smaller than normal
- This patient developed new hydrocephalus due to stenosis of the jugular foramina. The resultant venous hypertension created hydrocephalus by disturbing the pressure gradient which is necessary for CSF drainage into the venous system