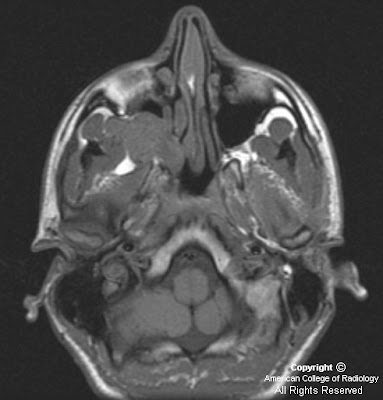 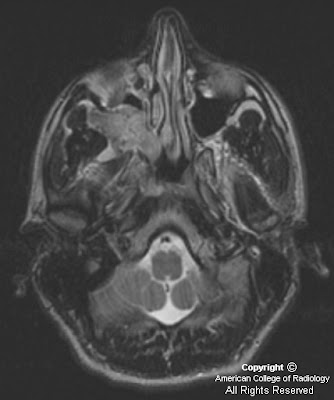 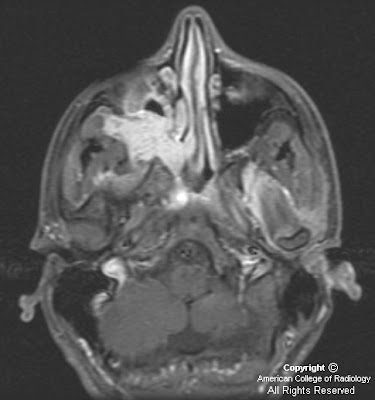 
Juvenile angiofibroma (JAF) presents in adolescent males (median age 15) with unilateral nasal obstruction and epistaxis. JAF is rare, representing 0.5 % all head and neck neoplasms; however, it is the most common benign neoplasm of the nasopharynx. Although the commonly used synonym is juvenile nasopharyngeal angiofibroma, true JAF entity arises in the nasal cavity, not the nasopharynx. However, it may spread into the nasopharyx.

JAF is considered benign but locally aggressive. Approximately 20 % have skull base invasion at diagnosis.

On imaging, JAF is a highly enhancing mass that is lobulated and nonencapsulated. Microscopically, it is composed of delicate thin-walled vessels on a background of connective tissue stroma. These delicate vessels lend the mass its tendency to bleed easily.

JAF originates at the posterior nasal cavity along the superior margin of the sphenopalatine foramen and posterior aspect of middle turbinate As it enlarges, this mass may fill the unilateral nasal cavity, and extend into the nasopharynx and pterygopalatine fossa (90%). If there is superior extension, it will involve the sphenoid sinus (60%). When it pushes anteriorly against the posterior wall of the maxillary sinus, it results in the classic “antral bowing sign” on CT examination. A small number may actually invade into the middle cranial fossa via the foramen rotundum or vidian canal. In these cases, bony destruction is evident.

On MRI, there is T1 intermediate signal and T2 intermediate-to-high signal. Flow voids are often seen in these very vascular tumors. Biopsy of this lesion is considered unnecessary and dangerous, given its propensity to bleed. An angiogram of both ECA and ICA with embolization using polyvinyl alcohol particles or Gelfoam is often performed 1-2 days before surgery to reduce surgical blood loss and decrease rate of recurrence. Local recurrence after surgery is 6-24%. Low dose radiation may be used in conjunction with surgery for cure. Rarely, chemotherapy has been utilized in cases of intracranial extension with favorable results.