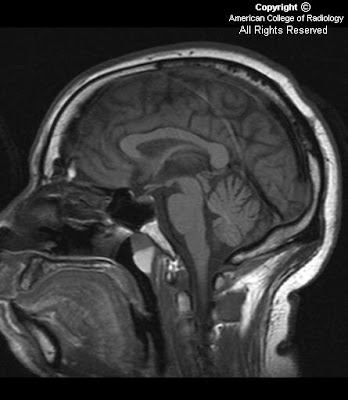 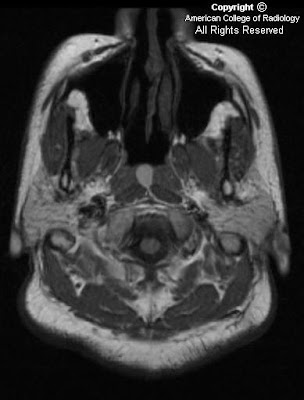 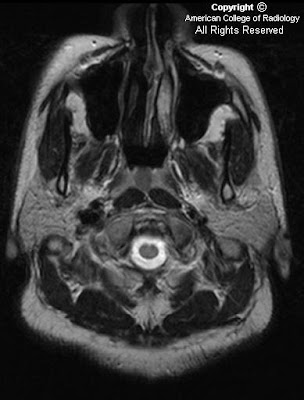 
Described by Gustav Ludwig Tornwaldt (1843-1910), a Tornwaldt cyst, or bursa pharingea, is a benign developmental cyst which is found in posterior nasopharyngeal soft tissues, anterior to the superior pharyngeal constrictors. The lesion is nearly always midline, although off-midline is possible. Identified in about 3% of patients, this cyst has no sex predilection with a peak incidence in patients from 15-30 years of age.

The cyst is formed during development, from a diverticulum which results from an adhesion between the notocord and endoderm of the posterior pharynx. As the notocord retracts normally into the clivus and cervical spinal column, a midline nasopharyngeal epithelial lined outpouching may close, forming a cyst. This is a part of the pharyngeal roof and a remanant of the Rathke’s pouch. Some authors believe that the lesion arises from a remnant of the notochord itself.

On CT, Tornwaldt cyst appears as a hypodense lesion in the midline in nasopharyngeal soft tissues. On MRI they demonstrate variable intensity depending on the degree of proteinaceous content, however are typically hyperintense on T1, T2 as well as FLAIR sequence images. The size of the lesion can vary from 5mm to a few centimeters.

These cysts are nearly always asymptomatic. They infrequently become infected resulting in neck pain or muscle spasm. If the cyst ruptures due to infection or trauma, the release of anaerobic contents may result in halitosis, eustachian tube obstruction or possibly an upper respiratory tract infection.