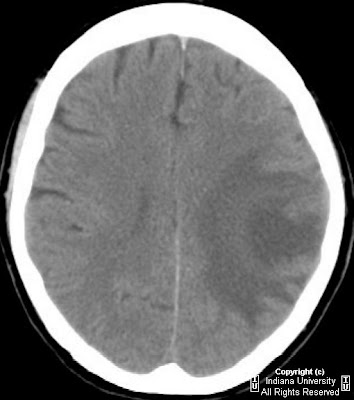 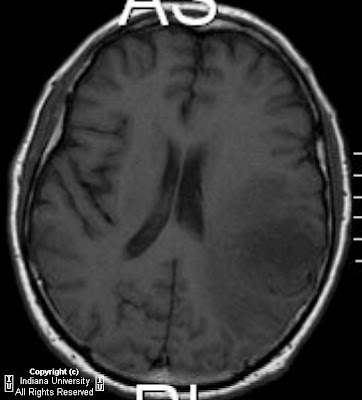 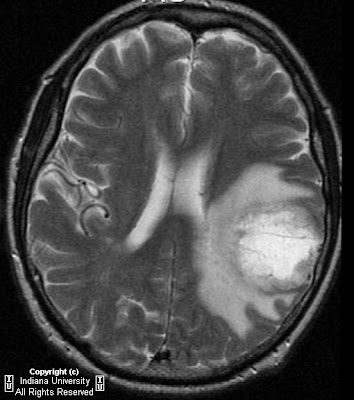 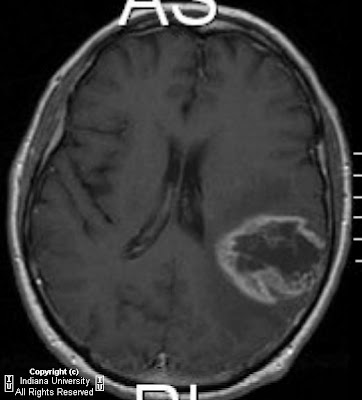 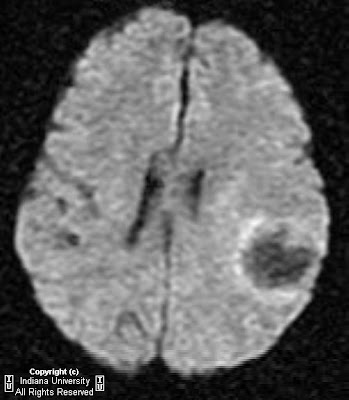 CT shows a large region of primarily white matter mass-like with hypodense center, with mild mass-effect in the high left frontoparietal region. MRI confirms a mass within the left frontoparietal region. This mass demonstrates thick, irregular peripheral post contrast enhancement and surrounding edema. There is no restricted diffusion within the central region of necrosis. There is no decreased T2 rim signal to suggest a fibrotic capsule. There is mild mass-effect on the left lateral ventricle and minimal left-to-right midline shift.


Each year approximately 17,000 primary brain tumors are diagnosed in the United States. Sixty percent of these tumors are gliomas. Glioblastoma multiforme (GBM) is the most common and most malignant of the gliomas. The GBM is a heterogeneous tumor composed of poorly differentiated astrocytes. Most commonly, GBMs affects adults and involve the cerebral hemispheres. Although much less likely, GBMs can affect the brain stem and spinal cord in children. GBMs can transform from lower-grade astrocytomas or anaplastic astrocytomas. However, in most instances, GBM arises new, without a precursor lesion. The GBM can spread via several routes including: white matter tracts, across the midline via commissures such as the corpus callosum, subependymal seeding of the ventricles, and CSF seeding of the subarachnoid space.

In this case, the differential diagnosis includes both neoplasm (most likely glioblastoma multiforme) or abscess. Both diagnoses were considered almost equally after the initial head CT. The MRI provided some new information, but still was not be conclusive for either neoplasm or abscess. Specifically, the lesion demonstrated a central region of necrosis but lacked restricted diffusion, making abscess less likely. Similarly, the lesion lacked a decreased T2 rim signal to suggest a fibrotic capsule, which also made abscess a less likely diagnosis. Because imaging was not conclusive for neoplasm or abscess, stereotactic biopsy was performed and revealed glioblastoma multiforme.