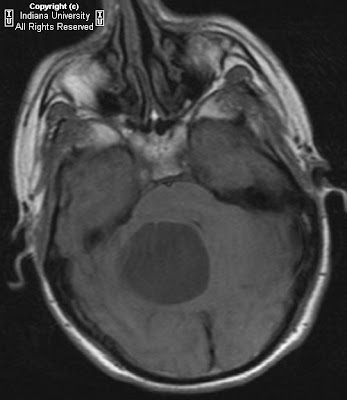 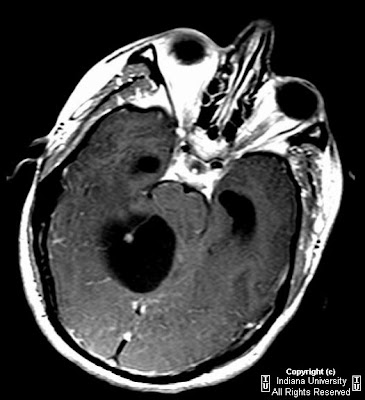 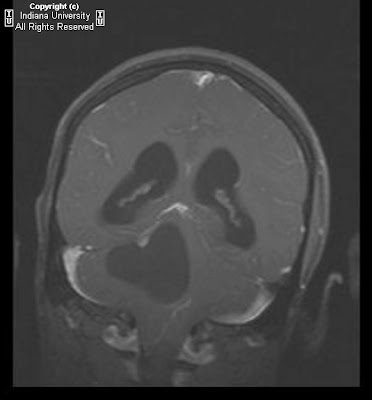 There is a right parasagittal lesion along the medial aspect of the cerebellum. The cystic mass has pronounced mass-effect on the dorsal brainstem and tectum. Extending from the cyst wall along one of the septations is an enhancing nodule.

The hemangioblastoma (HB) is a vascular neoplasm of unknown etiologycular. Cerebellar hemangioblastoma is the most common primary brain neoplasm involving the infratentorial space in adults. This benign tumor is readily curable by surgery. More than 85% of hemangioblastomas occur in the cerebellum, with the remainder occurring in the spinal cord, medulla, and cerebrum in a 4:2:1 ratio. Approximately 10% of posterior fossae masses are hemangioblastomas. Men are more commonly affected than females, and patients are usually young adults. The common symptoms are headache, nausea, vomiting, ataxia, and vertigo. In 40% of patients, polycythemia is present secondary to increased erythropoietin produced by the tumor (more common in solid tumors). A spinal hemangioblastoma may present with subarachnoid hemorrhage.

The classic findings of an HB are that of a cystic mass with a solid mural nodule (60% of cases), which is highly vascular and has serpentine signal voids of feeding vessels. However, 40% of HBs are solid. Less commonly, these tumors may be purely cystic. Overall, HB is a rare tumor representing 1-2.5 % of primary CNS neoplasms; 10-20% of all cases are associated with with von-Hippel-Lindau syndrome; converesly, 45% of patients with VHL develop HBs.

Treatment: Treatment frequently requires removal of the mural nodule only, since the cyst is not truly neoplastic. Preoperative embolization aids in resection of the highly vascular tumors. Prognosis is very good with 5-year a survival rate of more than 85%.